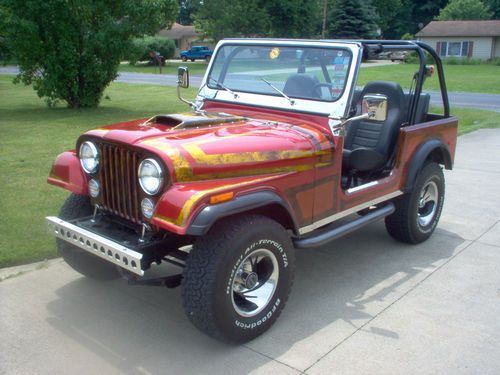 Up for bid is a VERY clean 1976 Jeep CJ7. First a little history on it. As everyone knows, Jeeps in northeast Ohio, were prone to rust. Sometime in the late 1980's the rust was getting the better of it. My dad decided it was time for a new fiberglass body. We went to 4WD hardware to purchase a new one. At that time 4WD had a Jeep they would use for promotions, it had a blown small block Chevy, all chromed out, etc. The former owner of 4WD hardware decided he wanted a new jeep for the showroom, and offered the candy painted body,frame, and chrome windshield frame to my dad. Of course he bought it, that is what you see here. Originally Dad's Jeep had a straight six, three speed manual transmission, manual steering, and brakes. After buying the custom painted body, Dad decided some upgrades were needed. Now the Jeep has power steering and brakes, Turbo 400 automatic transmission, tilt steering column, and a turbocharged Buick V6. At the time we installed it, it was fairly high tech. Dad is now in his 70's, and it is time to find the Jeep a new home. The Jeep has less than 11,000 miles on it since it was redone. Before anything was installed, (engine, transmission, axles, and transfer case) it was all professionally rebuilt. Thanks for looking.