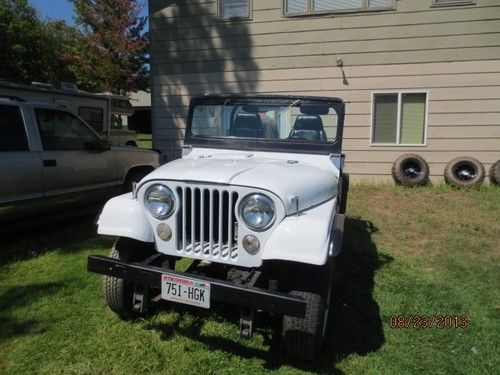 Condition: UsedA vehicle is considered used if it has been registered and issued a title. Used vehicles have had at least one previous owner. The condition of the exterior, interior and engine can vary depending on the vehicle's history. See the seller's listing for full details and description of any imperfections.Seller Notes:"used 50 year old jeep in good running and driving condition 2nd owner!"

Ultra rare 1963 all original steel body jeep willies cj5A with fording hood puch out and twin stick hi lo t90 12 speed trans dauntless V6 225  with two sets of tops and two sets of wheels and tires  runs and drives well spent most of it`s life in side ! and out of the salt !

and vey good resortation project since it`s complete or a great 4X4 off roader for muddin with friends.

pick up only cash only  no trades