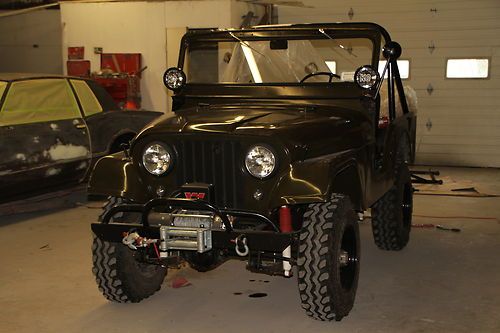 COMPLETE OFF FRAM RESTORATION. EVERYTHING NEW FROM TOP TO BOTTOM. SUPER SWAMP TIRES. RIGHT NOW IT HAS NO TOP OR DOORS ATTACHED. ORIGINALS ARE AVAILABLE AND INCLUDED BUT THEY NEED PAINTED . SEATS ARE REDONE. NEW BODY. COMPLETE NEW PAINT JOB WITH SIX COATS OF CLEARCOAT. STORED IN MY GARAGE. NEW 3 INCH ROLL BAR. NEW WARREN WINCH. NEW HIGH LIFT JACK MOUNTED ON REAR. IF YOU BOUGHT IT, I WOULD SUGGEST YOU RENT AN ENCLOSED TRAILER TO TOW  IT HOME. HAS NOT BEEN OUT IN ANY BAD WEATHER. NO WINTERS, NO SALT.