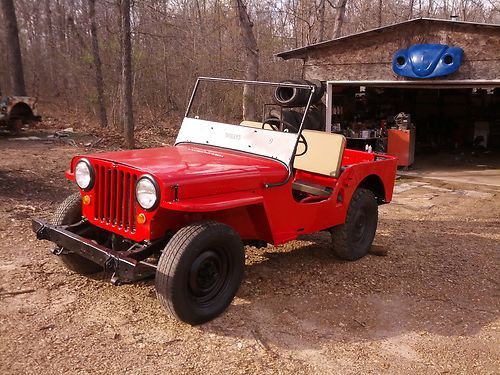 Selling a 1947 Willys jeep that has been restored. The restoration process was mostly completed but due to back trouble I was unable to complete everything. This was a body off restoration (see photos) and the body and frame were gone over for any repairs or replacement parts. I have two tires that match the front tires in size and will go with the jeep. The two military tires in the photos do not go with this jeep but are available for purchase separately and are brand new. The engine runs great and running gears are good. The clutch  disc is new as well as the solenoid, starter switch, shift knobs, hood latches, tail lights, paint, plug wires, park lights, many bolts and nuts, master brake cylinder, wiring harness, etc. Some of the restoration is not done. There is no glass in the windshield frame. The generator wires not hooked up, some gauges not working, no speedo cable, no e-brake lever (I have), brakes not bled, fuel tank not hooked up, radiator not bolted down, blinkers not hooked up (wiring is there for tank, horn, tail lights, etc. Ignition is wired up and working great. Headlights, tail lights and park lights all working good. As I said, I have back problems and cannot finish the project but it is mostly complete and a lot of work has been done as you can imagine. The Jeep comes with a bill of sale only. Lots of these old jeeps never had titles but they can be had with a little effort. If someone hits the "Buy it Now" the payment in full is due right then. Otherwise, a $500 down payment is due within 24 Hrs of winning the bid. Paypal is the preferred method of payment. Look, ask questions if you want, and bid up this nice, nearly complete restoration of a 1947 Willys Jeep CJ2A. Thanks for looking.