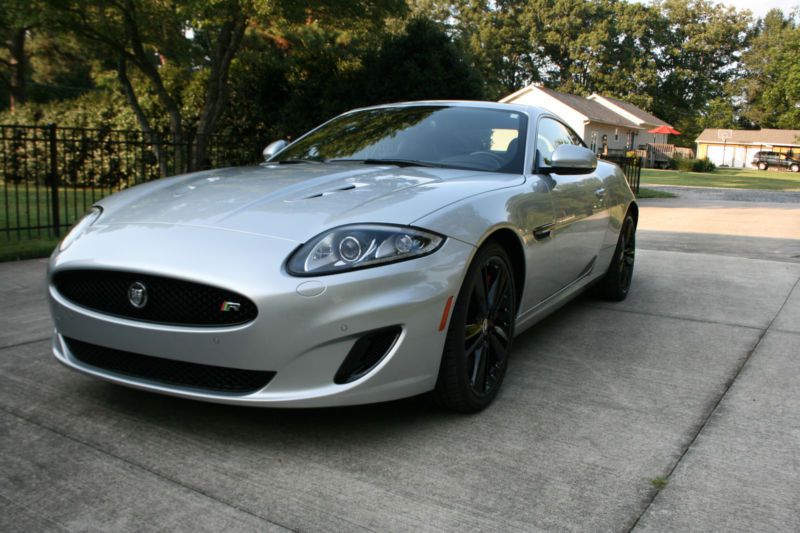 Please email me with any questions or requests for additional pics or something specific at: signessstankowitz@essexman.com .
This car is owned by a Jaguar club member and enthusiast. I have just put on new tires and had an alignment. In
addition, has had oil change, power steering service, cooling system service, air induction service with new air
filter, front brake pads and rotors. This car has the optional "Black Pack," which includes the black alloys, black
inserts, piano black interior trim with carbon fiber accents and full leather headlining. It is truly stunning to
see and drive. The V-8 supercharged engine is smooth and fast. This car still has full factory warranty until Sept.
21 2015 and Jaguar Select Edition extended warranty until Sept 21 2017/100,000 miles. This would add about $2000 to
the cost of this car at a Jaguar dealership. The floor mats are custom made for this car by CoComats. I still have
a new set of the factory mats as well. Asking $52,000.

Even though this year's winter has gotten off to an abnormally slow start for most of North America, Jaguar has shown the world it means business by launching its all-new Instinctive All Wheel Drive system in Montreal, Canada. Designed primarily for consumers in the Northern US and Canada, Jaguar put us on the same snowy, slushy and icy roads that many of its buyers will have to deal with. Rather than making declawed versions of the XJ and XF, Jag says this system enhances the performance abilities of its sedans when desired while still making them as fun to drive as their rear-wheel-drive counterparts. We had a chance to test out both the XF AWD and XJ AWD, but we spent most of our time behind the wheel of the flagship XJ, driving it on the open roads as well as a few closed courses.
Considering the lengthy and convoluted history of the Jaguar brand - including a stint as a member of Ford's defunct Premier Automotive Group alongside Volvo and Aston Martin - it is rather surprising that the automaker is just now getting around to introducing an all-wheel-drive system intended for widespread use, but the new Instinctive AWD will finally allow the XF, XJ and other future products to better compete against the likes of Mercedes-Benz 4Matic, BMW xDrive and Audi Quattro. In the XJ, Jaguar expects the AWD models to account for around 40 percent of the product mix nationwide and a little bit more (50 percent) for the XF, but in the northern states, it expects around 80 percent of XF sales to be AWD variants.
Instinctive AWD is rear-biased and operates as full rear-wheel drive in good weather, but when the road conditions turn slick, the system can split engine power 50:50 between front and rear axles using a center transfer case.