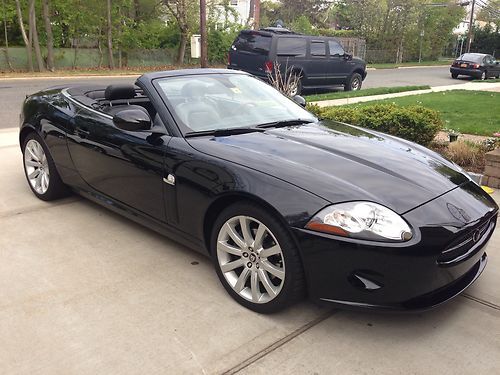 The car is is great condition and maintained 100% at the local Jaguar dealership.   There is a small surface scratch just behind the drivers door.   I found it today while photographing the car.   I will have it compounded out by my detailer.   The car as mentioned, is in great shape, but is not "new"
It has the factory Jaguar wind screen which cuts down on wind whipping back at you from behind.   A great feature to have if you have a long haired lovely sitting next to you.  Also installed by the dealer is Jaguar's auxiliary input which allows an iPod direct connect or another input via USB or RCA.  The car also has adaptive cruise control.  This is an amazing option.  If you have never had the opportunity to use... you will love it.
It is the BUYER'S responsibility to pick up the car or to make and and all shipping arrangements.   I WILL NOT make any shipping arrangements.
The car must be paid for by cash, certified check... or if Pay Pal is used, buyer will need to pay all PAY PAL fees in addition to the cost of the vehicle !
Please feel free to contact me with any questions you might have.