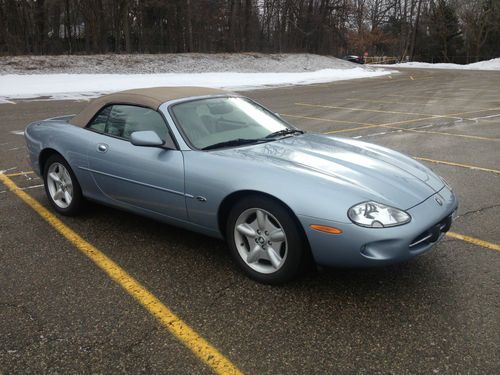 You're looking at a very well cared for 1997 XK8 convertible.  This car is in great shape.  Everything works.  Air conditioning, cruise control, heated seats, power top, leather interior, power windows, power locks, cassette with  factory CD player in the trunk. Power tilt and telescopic steering.  Keyless entry.  Interior trunk and fuel release.  Traction control.  4 wheel disc brakes, rear defogger, tachometer, power antenna. This car is loaded.  The last two pictures are the broken pieces of plastic on the outside of each front seat. One scratch on the rear bumper that has been toughed up.  No rips or tears in the leather.  Newer Pirelli tires.  This car is fast and handles like the sports car it is.  This car has always been garaged.  I have the original sale receipt.  I am the second owner.  This car is selling for less than any other on ebay.  Reserve is not far from starting bid.  I want it sold.