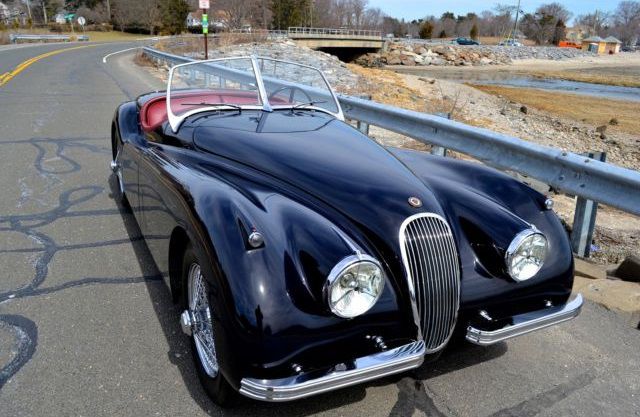 The rear differential was likewise rebuilt at that time, and the clutch was replaced.

The suspension was restored and rebuilt, as were all bushings, rubber, shocks and bearings.

The brakes, hydraulics, electrics (including wiring harness) and exhaust likewise were replaced at the time of restoration.

The restored interior is in excellent condition, including the RED leather seats, red carpets and red leather dash.

The only deviation from stock is that the seat backs were crafted to give the interior 6 more inches of legroom; normal sized adults can now drive this car!!!

The roadster top and mechanism has been restored and is in as-new condition.

All of the chrome on the car is like new, as are the lights, lens and covered headlights.

The underside is excellent and shows as near new.

This car is extremely well sorted, and runs better than any XK we have driven.

Simply turn the key and press the starter button and this car fires immediately and settles down to a beautifully idle.

The sound of these cars cannot be replicated.

This car is the epitome of a British sports car, and gives the feel that only an XK roadster can deliver

Feel free to email me anytime !! Thank you