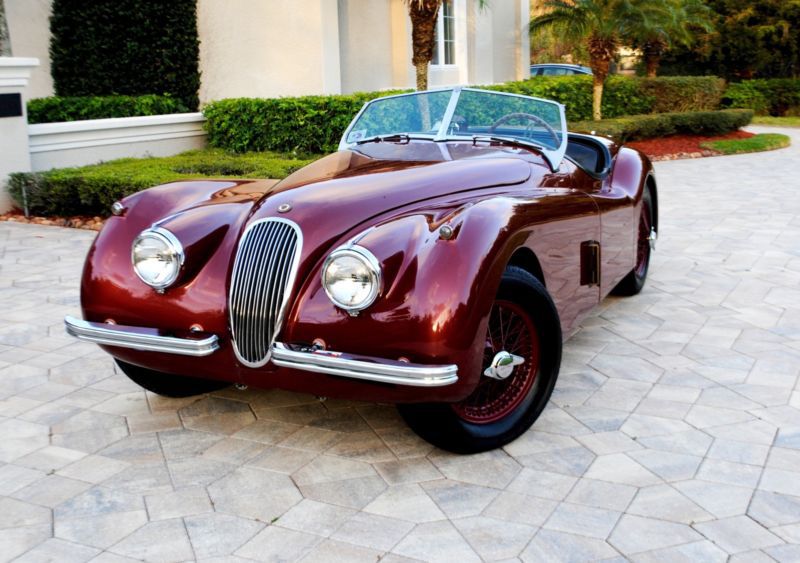 If you have any questions please email at: violetvffuson@ukdesigners.org .

This rust-free roadster was originally finished in a Birch Grey with Red Interior, and the car was repainted in 2010 in stunning Imperial Maroon with the interior fitted in Traditional Black. It is an impressive color combination that shows off the beautiful and graceful lines of this Classic. So many of these cars are white or light pastels that do not do justice to the remarkably fluid design.

The car interior leather in a beautiful supple condition without tears or cracking. New carpets have been recently provided and the dash and door panels are excellent. The car is fitted with a new black tonneau cover as well. There is no hood, or side curtains provided with this car.

This lovely Roadster also features a built-in bar behind the driver's seat! Room for two bottles and two glasses, neatly packed for your weekend getaway!

The strong 3.4L runs out smoothly, revs smooth and strong and maintains great oil pressure. What fun to drive!

A heavy duty electric fan has been fitted to provided excellent cooling and drivability in our Southwest Florida summer weather.

All gauges and lights work properly. The car has been modified to a 12V system and fitted with a battery on-off switch (a great feature for the collector), as well as a bank of toggle switched for the electric fan, fuel pump, electric choke, turn signals and lights.