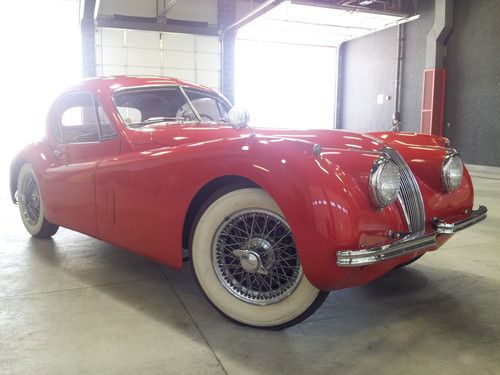 1953 JAGUAR XK120.  ENGINE AND DRIVE LINE COMPONENTS ARE VERY STRONG.  INTERIOR IS IN GREAT CONDITION. CHROME IS VERY NICE. PAINT IS PRESENTABLE, BUT NOT SHOWROOM CONDITION. BODY IS VERY STRAIGHT WITH DOORS BEGINNING TO SAG. TO ALL THE JAG ENTHUSIASTS, I UNDERSTAND THAT THE STEERING WHEEL IS NOT ORIGINAL OR OTHER INTERIOR PARTS ON THE CAR.  LET ME STRESS THIS IS A TRUE MATCHING NUMBERS CAR THAT IS AS RUST FREE OF AN EXAMPLE ONE CAN FIND. IT IS A DRIVER THAT ONE WOULD NOT BE AFRAID TO DRIVE.

THANK YOU FOR THE INTEREST.

Jaguar continues to think well outside of the box when it comes to marketing it's new F-Type, now furthering plans for a short film which highlights the sexy roadster. Desire, featuring Damian Lewis (star of the hit series Homeland), Jordi Mollà (unforgettable in Bad Boys II) and Shannyn Sossamon (that girl you had a crush on for like a month in 2002 after you rented A Knight's Tale), Jaguar is clearly pulling out all the stops for this one. Well, nearly all the stops anyway ­- the "Ridley Scott Associates" billing isn't quite the same has having the man himself, if we're splitting hairs.
The short video below is still just a trailer for Desire - the full film will make its debut sometime in April, we're told. The sketched out plotlines tell us that Lewis' character Clark, "...delivers cars for a living, running into trouble after a chance encounter with a mysterious, young woman (Sossamon) in the middle of a lawless desert." The car looks good, at any rate.
Call us crazy, but the Desire trailer feels an awful lot like a spoof on the cool-but-overly-serious short films that BMW has done in this vein, already. Maybe we're just being cynical? Tell us what you think in comments after watching the clip.