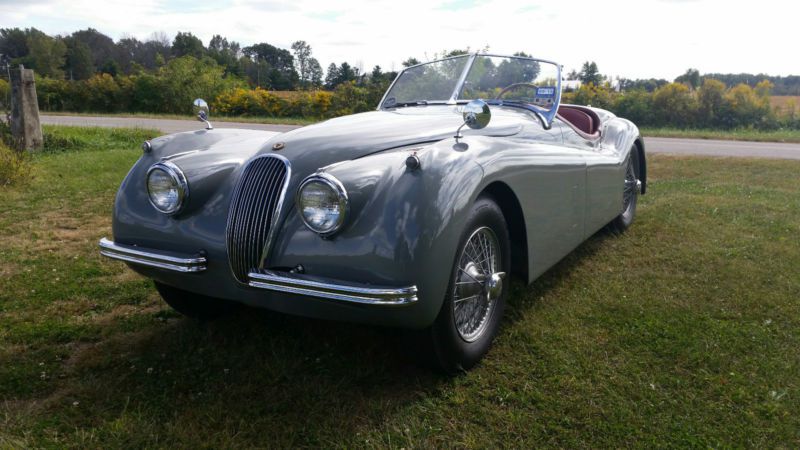 Please message me with questions at: mindymccalzadilla@1dad.net .

Beautiful, 1953, XK120. SE, M, roadster, with all matching numbers, and original matching colors in birch gray with red leather and cream piping with a gray soft top. All matching colors and numbers per the Jaguar Heritage Certificate which is included. This XK 120 roadster has undergone a total restoration completed in 2013 on a very nice original car. There is a 48 page book detailing the complete restoration including the time, dates, costs.
Driving this XK120 roadster is like driving a brand new car with a new engine and transmission on new tires and brakes. This XK 120 starts, runs and drives like new. And it sounds and looks fantastic! It comes with original manuals, tools, original keys, Jaguar Heritage Certificate, restoration book, restored side windows in their covers, restored wire wheel spare and new tire, and Motorola radio.

This classic Jaguar XJ has a 720-hp ungentlemanly secret

Forget Tawny Kitaen. If you want to make a Jaguar XJ rock, just do what this guy did: stuff a heavily modified and turbocharged General Motors V8 under the hood, and take it to the track.
The video calls this Series 1 XJ a sleeper, but with its open exhaust and obvious turbo whistle, the once-gentlemanly sedan is anything but. The owner says that the engine is GM LQ9 V8 that has been stroked to 402 cubic inches putting out around 720 horsepower with 12 pounds of boost (in standard form, this 6.0-liter V8 was used in the second-gen Cadillac Escalade). Check out the video below to see what that kind of power does for this classic Jaguar in the eighth-mile.