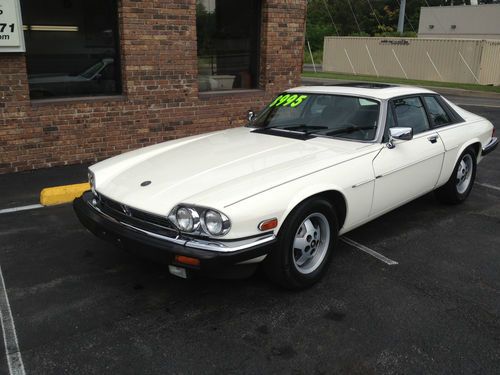 Condition: UsedA vehicle is considered used if it has been registered and issued a title. Used vehicles have had at least one previous owner. The condition of the exterior, interior and engine can vary depending on the vehicle's history. See the seller's listing for full details and description of any imperfections.Seller Notes:"THIS RARE, HARD TO FIND BEAUTY IS IN ALL ORIGINAL AND MINT CONDITION. THERE IS NO DENTS, SCRATCHES OF ANY KIND. ORIGINAL PAINT, NO BONDO AT ALL, CHROME IS IN EXCELLENT CONDITION, AND WHEELS HAVE NO CURB MARKS OR SCUFFS. NON SMOKER CAR, ALWAYS GARAGED AND NEVER EVEN DRIVEN IN THE RAIN. IT HAS ALWAYS BEEN PROPERLY MAINTAINED, WELL CARED FOR AND READY FOR A NEW HOME. IT CAN BE DRIVEN WITH CONFIDENCE TO ANYWHERE."

IF YOU HAVE BEEN LOOKING FOR A JAGUAR THIS IS THE CAR FOR YOU.  THIS IS A RARE, ONE OWNER, ALL ORIGINAL BEAUTY. WELL MAINTAINED, EVERYTHING WORKS LIKE IT WAS BRAND NEW. THIS IS NO DENTS, SCRATCHES OF ANY KIND.  IT IS POWERED BY A 5.3L V12, AND HAS A AUTOMATIC TRANSMISSION.  SHIFTS SMOOTHLY, NO RATTLES, CLUNKS OF ANY KIND. SINCE THE DAY IS WAS PURCHASED IT HAS ALWAYS BEEN GARAGED, NEVER DRIVEN IN THE RAIN, THERE ARE NO STAINS OF ANY KIND EVEN IN THE TRUNK AREA.  THE CAR IS SO CLEAN IT COULD BE A SHOW CAR. PLEASE FEEL FREE TO ASK ANY AND ALL QUESTIONS AND BID WITH CONFIDENCE, YOU COULD DRIVE THIS CAR ANYWHERE WITH NO PROBLEMS.  IT IS FOR SALE LOCALLY AND WE RESERVE THE RIGHT TO END THE AUCTION EARLY IF IT SELLS.  DON'T MISS OUT ON THE OPPORTUNITY TO OWN THE BEAUTIFUL CAR.

A $500 DEPOSIT IS REQUIRED VIA PAYPAL WITH IN 24 HOURS OF A WINNING THIS VEHICLE. THE BALANCE IS DUE WITHIN 7 DAYS AND IS TO BE PAID IN ONLY CASH OR CERTIFIED CHECK.  THE WINNER IS RESPONSIBLE FOR ANY AND ALL LOCAL SALES TAX AND DMV FEES.
WE ARE LOCATED AT
HIGH REV IMPORTS, LLC
605 EAST MAIN ST, SUITE B
PALMYRA NY 14522
315.597.5471
ONCE AGAIN PLEASE BID WITH CONFIDENCE...