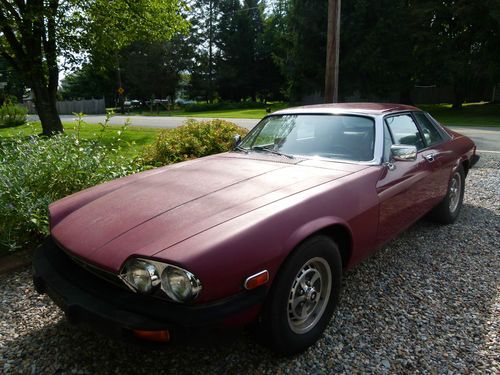 Condition: Used: A vehicle is considered used if it has been registered and issued a title. Used vehicles have had at least one previous owner. The condition of the exterior, interior and engine can vary depending on the vehicle's history. See the seller's listing for full details and description of any imperfections. ...
Up for auction is a 1979 Jaguar XJ-S with only 6,958 ORIGINAL MILES!!!!
Still has the new car sticker in the window.
The good:

Starts right up and runs, drives, shifts through gears.
No rust through. Some surface rust, but no rust on the quarter panels, floor boards solid.
Almost new set of tires (only 6,900 on the car, tires show no wear).
All original except for a new fuel pump and fuel filter.
All lights work.
Interior in good condition. (back seat seam split).
Car is complete and solid.
Many spare parts, too many to list.
Repair manual and parts catalog included.

Runs very rough, needs a good tune up, it's been sitting for 11 years in a garage.
Needs a new distributor, one of the screw supports is broken off.
Needs a paint job, the paint is faded.
The parking brake light is always on.
Some minor surface rust (see pics).
Back seat seam split (see pics).

Don't know too much about this car, acquired it through an estate and really don't have the time to put into it to get it up to showroom condition.
Car will need to be towed or transported.
Buyer responsible for making all arrangements for and paying shipping. I'll help you out as much I can with arrangements.