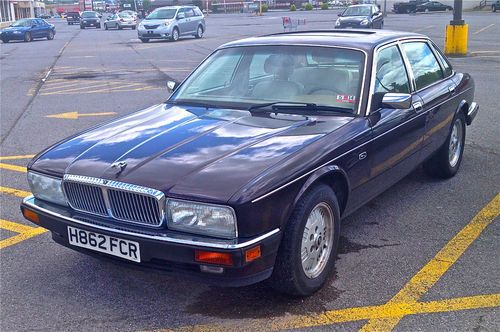 Condition: UsedA vehicle is considered used if it has been registered and issued a title. Used vehicles have had at least one previous owner. The condition of the exterior, interior and engine can vary depending on the vehicle's history. See the seller's listing for full details and description of any imperfections.Seller Notes:"No Rust on the car whatsoever, however there is some paint fade on the roof and a scratch on the passenger side door. The driver side seat has some wear. Other than those few things the car is in excellent shape. Drives great does not idle rough and shifts smoothly."

For sale is a RARE 1994 Jaguar XJ-6 Vanden Plas.  These were the top of the line in their day the wood trim (with light colored wood accents etched around it)  and solid wood trays is what makes this car stand out from other Xj6s as well as the fluted grille and trunk trim.  All power options work I think the sunroof is off its track the motor does make a sound. All light work as they should (inspection sticker good untill. The car has no rust at all which is a hard to find on these jaguars.  The roof needs a repaint (typical 90s car problem) the interior looks great no dash cracks .  The powertrain is strong with no leaks, steering is tight. The car's power options all work as they should; the a/c blows cold just not too powerful, most people would think its broken but its how it was designed, it was designed for gradual cooling and heating.  This car does turn heads after all these years. These are great cars and on the verge of becoming collector's cars.  With a very small amount of work it will look wonderful again.

Shipping and Payment: arrange shipping with any of the shippers located on the auction page or drive home personally.  Payment 500 deposit within 24 hours and final can be cash in hand or cashier's check from your bank.  The car will come with clear title in hand and bill of sale.  It is being sold As-Is with no refunds!!

What do you do when you're an automaker with an all-new and brand-defining sports car, one of them with a supercharged V8 cranking out 495 horsepower? You let proven race drivers test them out on track and on the road.
And what do you do if you're Jaguar and you're in that situation? Why, naturally, you make a video of it. That's how we get footage of racers Martin Brundle, Justin Bell and Christian Danner being choppered into the UK's Snetterton track to test the V6-equipped Jaguar F-Type S prototype. Then when they're finished with kerb-lined apexes, they take the V8 S prototype out onto the roads to run it through hedge-lined apexes.
According to one of them, "very fast, very nimble, great engine" is what will soon be headed our way. Check it out in the video below.