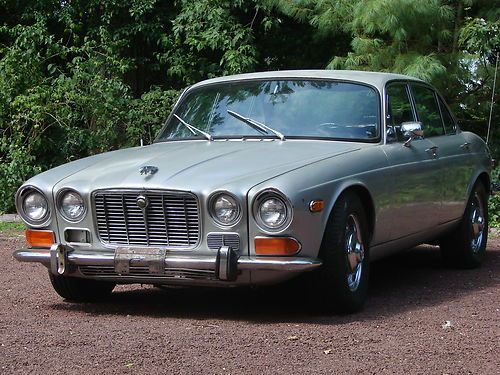 Great XJ6 restoration project. The early XJ's had all the lines that made Jaguar a marque. These cars came along before British Leyland and Ford influences.  I have the car running nicely. It has not been on the road for a few years but I drained the old gas, flushed out the tank and cleaned the carbs. It starts and runs nicely. It was taken off the road due to a leak in the exhaust manifold where the downpipe attaches to the exhaust manifold. Not overly loud but enough to warrant a new gasket on one side, or tightening. The engine runs very nicely. It was tuned just prior to taking off the road. I rescued the car from a local man that was third owner and had lost interest in the car. I don't see why it can't be put put back on the road and a driving restoration take place. It will need painting, a headliner, a rubber for the front overrider, or a pair of earlier overriders would be nice, the centre of the rear bumper could use replating. The seats are worn in and comfortable. I see new leather seat covers on ebay at $280.00 for the fronts and the same for the back. The back seat has a crack and some of the seams are separating on the top. One of the horn rads is missing as is the right side sun visor. These small bits are easily found. The factory air cleaner comes with the car. I took it off to clean the carbs.

The tires are new, still having the paper on the treads and tags on the sidewall. They are Michelin. The gearbox seems to shift smoothly. I have not taken it down the road, only driving it around in our driveway. The brakes feel good. Radio works. The previous owner was driving the car prior to the exhaust manifold leak. All the lights and all gauges work, but not certain about the fuel gauge. I replaced the dual tank switch, but not enough gas in the tank to test it.

I don't see any rusting out. Surface rust in spots and on the roof but this can be addressed with painting. A good driving project at a very affordable price. No reserve auction.

The previous owner recently had a new front windshield with seal replaced.