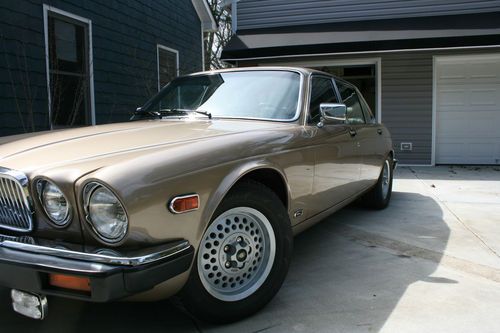 I have a very unique Jaguar here up for auction. It is restored to a very high standard. On the body, the chrome bumper blades are new in the rear, the windscreen is new and the areas at the corners of the front and rear windscreens have been repaired properly and are rust-free. These places are trouble spots for the Series 3 sedan. If looking at other cars, always check there for paint bubbles! The entire car has been resprayed and looks great. The wheels are the "Pepperpot" alloys which are not common for cars sent to the US.

On the interior, the leather seats have been redone with Connelly hides as original. All of the walnut trim had been redone as well, along with the headliner. It is perfect. I've even upgraded the steering wheel with the sport wheel from an XJ-S.
Mechanically, the car is spot-on and well sorted. The engine actually came out of another Jaguar sedan that I had which had been imported from Europe. That car got wrecked and the engine went into this car. The head gaskets have been replaced about 5-6k miles ago as well as the crank bearings. This euro-version engine has a bit higher compression than the US version at 9:1. Makes it a bit peppier. The gearbox is an original Jaguar 5 speed Rover LT 77 'box. Very few cars sent to the US were so equipped. The 5 speed really makes the XJ sedan a different animal, especially when you can cruise down the highway at 70 mph, only turning 2300 rpm. This gearbox was rebuilt by a shop in CT which specializes in these transmissions.
On the underside, the suspension bushings, steering rack bushings, shocks and springs have all been replaced. Brakes are great as well. No surprises with my cars. Everything works as it should, except the cruise control. When I did the 5 speed conversion, I never got the cruise working again because I didn't use it anyway.
The climate control works perfectly with cold air and warm heat. And yes, I replaced the heater core when the interior was removed!
Bottom line is I've got WAY more in the car than it will ever be worth, but I'm a Jaguar enthusiast, JCNA member who does things right because I love the marque. Get a nice Series 3 Saloon for much less than you would spend on a lesser car getting it to anywhere close this condition. I have tons on other pictures showing the resto in progress. Any questions, please ask. The car is open for inspection anytime.