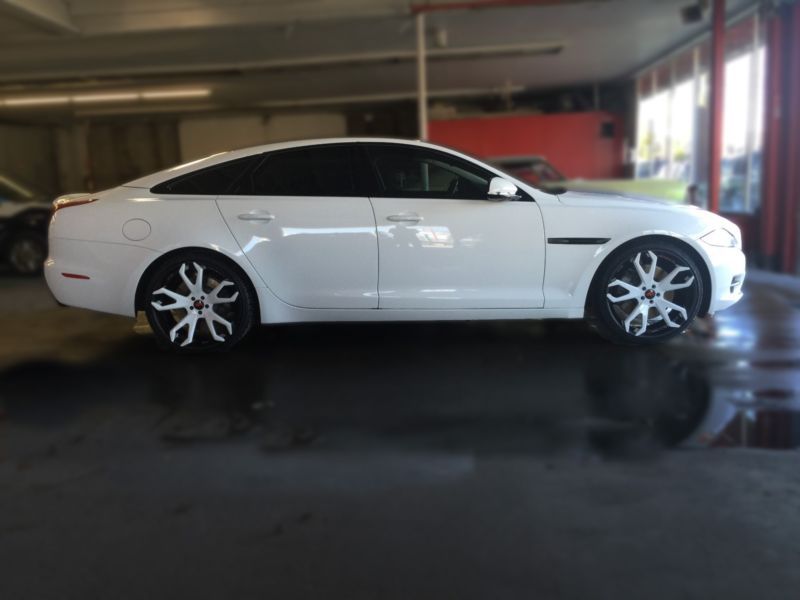 For more pictures email at: issachelsey@netcmail.com .

What we have here is perhaps the nicest custom Jaguar XJ Supercharged in the country!
We started out with a perfect, low milage example of the XJ Supercharged short wheel base car finished in stunning
polaris white with a rare navy blue interior. This is the only car with this color combination I have ever seen as
I’m guessing 90% of the white cars only were optioned with the black interior and the other, say 18% of the white
cars were built with the all too common, non contrasting tan interior. The navy blue with the ivory piping is
absolutely gorgeous in a white Jag and must be seen to be appreciated.. The heated steering wheel boasts a custom
matching navy perforated leather wrap that matches the interior impeccably. The trim on the car is the black
walnut giving the car a modern, sleek interior decor and not the all too common- burl most other Jags have. The
windows are professionally tinted with polarized non metallic tint job that cost $800. The car has all options
including cold weather and Illumination pack. This was a $4500 option that illuminated the vents, trunk plate and
kick panels with blue led mood lighting. The car is also optioned with the $2700 1100w Bowers & Wilkins upgraded
stereo.
Moving on to the exterior.
The Platinum Edition car relates to the 75th anniversary show car that was featured at the Geneva car show by
Jaguar last year. That particular car was firstly completely de-chromed. Following in that tradition, all the
chrome on the car was completely removed and finished in black. This includes the chrome grille, grill trim and
window trim. The panorama window trim was also finished in black to provide the car with a cohesive layout and not
the broken color scheme provided by the factory. the rear valance was also finished in matte black as well as the
tailpipe to make the car look up to date. There in no chrome left whatsoever on the exterior of the car. An Arden
trunk spoiler painted in factory white is also installed. Add to the look a professional window tint and you can
plainly see that this Jaguar is set so far apart than even the XJR which contains the same motor as this car. No
XJR even looks as good as this car I assure you.
Added are a set of color matched polaris white and black custom 3 piece Forgiato rims fitted with 90% tread tires.
The wheel and tire package were bought at California wheel for $7500 and the car will come with the receipt to
prove it! The rims are 4 years old and do show a few signs of use but have been touched up.
Don't make the mistake of comparing this car to any other XJ in the world!
The calipers are finished in a brilliant Porsche red, designed to keep dust off your wheels. Other extras include
Jaguar factory metal sport pedals, and LED logo illumination kit that shines the Jaguar emblem on the ground at
night when you or the passenger opens the door.
The condition of the car is 10/10. There are no surprises to be found. Not a scratch anywhere. Car just came off
it's last service and I had the dealer change/replace anything with a lick of wear and the car stayed in the shop
an extra day after promise date to make sure every part that could possibly fail in the near future was back to
new. The N/C bill was $3800. You can rest assured that the car is as close to new as any 2012 could possibly be!
Take a close look at the hi-res pictures that are included and tell me if this is indeed the best looking XJ in the
country. I challenge you to find a better example anywhere!
This car will attract crowds anywhere you go with people wondering what they are looking at.