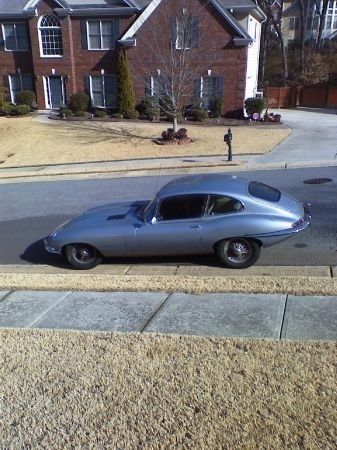 The car was found in the garage when resided past 25 years or so!!!

and bring it to the next level!!!

This is honest clean car without stories behind!!

Reserve price was set fairly so don't hesitate to bid!!!

Bidders with 0 feedback must contact me before bidding or their bidds will be canceled!

Please check my feedback and bid with confidence!!!

The idea of altering a classic Jaguar E-Type might seem preposterous to some, but Jasen Len of XKs Unlimited managed to create a modified 1964 E-Type that stays true to the Jag's timeless design. Just a few months after Jay Leno featured his own original E-Type on Jay Leno's Garage, Len stopped by to show off his custom Jaguar creation.
Starting out with a rust-ravaged body, Len made the car just the way he wanted it to be. He started off with some minor changes to the car's exterior like the Le Mans-inspired racing lights and handmade front bumpers, handmade sills with integrated exhaust and flared rear fenders. Inside, he dropped the floor to make more interior space and reworked the E-Type's styling for more of a modern look. We have to say, if you're going to mess with a Series 1 E-Type, this is the way to do it.
Sadly, even though Len and Leno spend plenty of time talking about the car's 300-horsepower 3.8-liter inline six-cylinder, we never get to hear the car fire up. Check out the JLG video, which is posted below, and as a bonus, enjoy the gallery from Jaguar showing a 1961 E-Type.