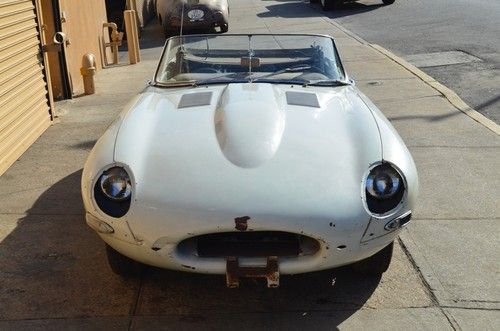 Condition: Used: A vehicle is considered used if it has been registered and issued a title. Used vehicles have had at least one previous owner. The condition of the exterior, interior and engine can vary depending on the vehicle's history. See the seller's listing for full details and description of any imperfections. ...
Up for sale truly amazing find, 1964 e type roadster 100% factory car!!
The car has 36,000 original miles and has never been touched!!!
Original color, never repaint, original interior, original tools and jack!!
Full matching numbers car with factory 3.8L engine!!
I could not find any rust besides the surface one, extremely clean underside!!!
If you are looking for e type roadster to restore there is no much better story than this one!!
2 owners since new, last owner since 1975!!!
This is collector car so please bid accordingly!!!
Overseas buyers welcome, shipping to EU and UK $1300
Please check my feedback and bid with confidence!!!

All sales are final, sold as-is!!!