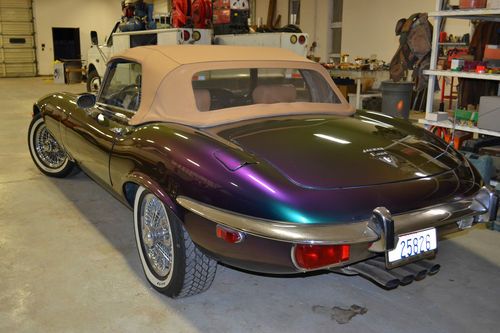 I am listing this car for my grandfather. He bought the car in 1982 from the original owner, to this day he's put about 4000 miles on it since he bought it.

This was a nice rust free car to start out with, but in 1999 he decided to do a full restoration, If I remember correctly, there was about 50 or 60 grand spent on the restoration, I'm actually afraid to ask again.  Everything was gone through including the engine and drivetrain. anything that needed replaced was, including a bunch of parts that didn't need replacing. In addition there was a custom brake booster installed to get rid of the problematic factory booster, the new setup works wonderfully, and only a purest could tell by looking that its not factory. the original brake components are included with the car.
The exhaust system is all new stainless steel from XK,s The exaust is the earlier version with the four tips instead of two, grandpa liked the look better.
The paint is obviously not a factory color, it is a color change paint that cost 2500 a gallon in 1999, this is a multicolor color change paint, not just a 2 or 3 color paint that is cheaper and more common. Its really pretty impressive.
The only thing that wasn't replaced were the tires, I don't know why they were not replaced other than he liked them and they are still in good condition.
As I said the car was restored in 1999, it hasn't spent a night outside since then, in fact I dont think there are enough miles on it to properly break in the engine.
The car has been sitting but it gets driven at least a couple times a year, usually only around the block, but thats enough to keep everything lubed and working.
The car needs to be cleaned, mainly its just dusty from sitting in the shop, it would be back to show condition with a good detailing and wax job.
There are only 2 things that I can think of that need repair. The tachometer stopped working for some reason, the tach itself may need repair, or it could be a bad connection, I would assume the worst. also the weatherstrip on the drivers door got pinched in the door at some time, its taken on the pinched shape and may need to be replaced.
I don't think there's anything else that needs attention. If you are serious about the car, I can put you in touch with the owner, he can do give you a history of the car. I can also give you any info you need, if I don't know the info you need, I will get it for you.
This car was originally blue, there is a pre restoration picture included with the other pictures. Some of the pictures were taken just after the Restoration, others are current. One picture is a group of photos that were taken during the restoration. let me know if you have any question's about the pictures.

Overall this is a nice car, I'm sure its still in better condition and more reliable than a new one would have been.

Please feel free to ask any questions. If you want to look at the car, its located in Vancouver Washington, just contact me, I will arrange an appointment.

If you need shipping, I can usually arrange shipping for 1.00 a loaded mile up to 1200 miles, that would get it to southern California or Arizona. beyond much more than 1200 miles you would have to arrange for your own transportation.

I hope I didn't miss anything, Feel free to ask as many questions as you want.