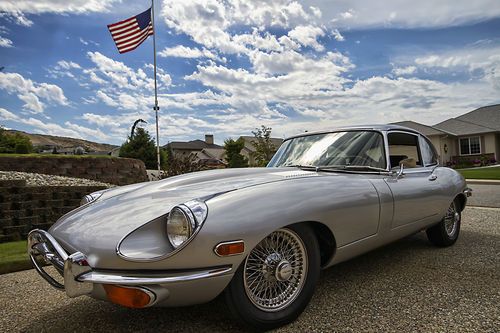 If there were any car to overshadow the 542-horsepower Jaguar XJR that's coming to the New York Auto Show, this is it. Meet the Jaguar XKR-S GT - a street-legal, higher-performance version of the already hardcore XKR-S that will be headed to North America in very limited quantities. Only 30 will be offered on our continent, with 25 earmarked for the United States and the remaining five going to Canada. The cost of entry? $174,000 when it goes on sale this August.
What that gets you is a coupe that is, without any doubt, ready to attack any racetrack it might encounter. The XKR-S' supercharged 5.0-liter V8 has not been upgraded in terms of power - not that 550 horsepower and 502 pound-feet of torque is anything to sneeze at - but instead, Jaguar focused on tuning the bits of the car that help effectively put all that grunt to the ground. There's a new hood with rows of louvers to aid in engine cooling, and elsewhere on the car's body, you'll find carbon fiber on the redesigned front air splitter, dive planes, extended wheel arch spats, as well as a new rear diffuser, an aluminum front under tray and an absolutely massive wing out back to keep downforce to a maximum.
Underneath that hot body are retuned and height-adjustable adaptive dampers; spring rates have been increased by 68 percent in front and 25 percent at the rear versus a standard XKR-S. Most of the front and rear suspension geometry has been upgraded, larger carbon ceramic brakes have been fitted at all four corners, and wider 20-inch forged alloy wheels are found here, wrapped in Pirelli Corsa tires - 255/35-series rubber in front and 305/30-series stuff out back. There's also a revised active exhaust system, which should only improve the already thunderous roar coming out the back of the Jag coupe, and a faster steering rack has been added for improved agility.