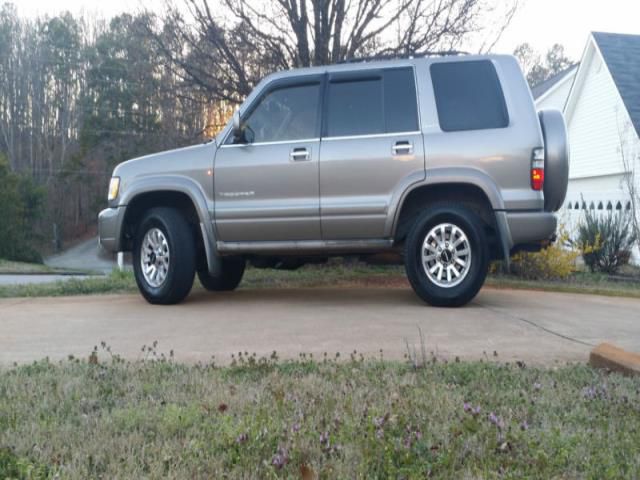 2001 Isuzu Trooper Limited 3.5L with all the options available for this SUV. This Trooper has been adult driven and is my daily driver, it is an excellent running, driving and shifting SUV with everything working and almost new tires. Engine was redone by previous owner at 93,000 miles, uses no oil, no smoke and runs very smoothly. The transmission was replaced by one that has 87,000 miles by me and was professionally installed with new fluid and filter. The 4WD works flawlessly, the 4 high shifts on the fly by a push of a button and 4 low when engaged is a totally different beast. This trooper is unmolested strait from the factory and has more clearance and wheel travel than most lifted Jeeps. If you want a luxury 4WD that seats 5 comfortably, with plenty of cargo space this is your truck. My troop comes equipped with a Pioneer Bluetooth hands free unit with premium speakers, Class 3 hitch, Roof Rack, European fender turn/marker led lights, and Hella amber offroad series fog lamps. If you have any questions please don't hesitate to ask. Also if you want to know more about Troopers and what they are capable of, go to YouTube and type Isuzu Trooper vs. Consumer Reports.