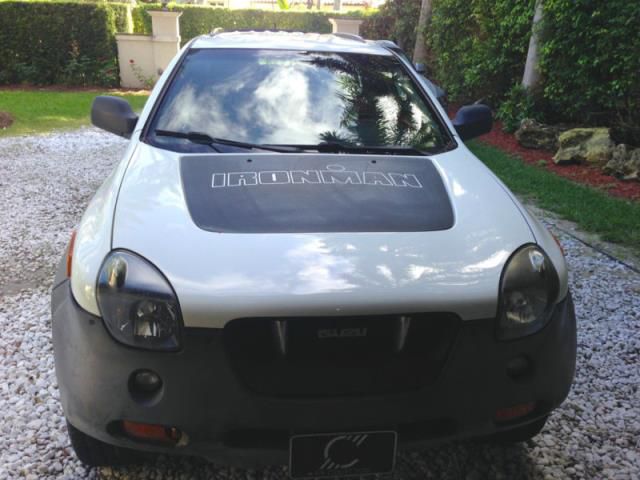 A true collector's item! Very limited '99 Isuzu VehiCross Ironman edition with low mileage and in great condition! The VehiCROSS was highly regarded for its cross-terrain performance. This particular model (the Ironman Edition) was produced as a result of Isuzu's co-sponsoring of the Ironman competition and incorporates special graphics, a wing-style roof rack and unique interior embossing. Only 420 Ironman's were manufactured in 1999 out of 2,005 total VehiCross' manufactured in the same year AND in the three short years of VehiCross production - from '99-'01 - a slim total of 4,153 VehiCross's were manufactured for the US of which a total of only 602 Ironman's were ever produced Condition: Car has slight dent in rear (fender bender) and right-front tweeter could be replaced. Some mild paint fading as car is over 14 years old. You will not find this car with less miles anywhere! Added features: original owner updated exhaust to a performance exhaust and it sounds like a race car; tow hooks in rear. History: purchased from original owner in 2005. Vehicle has been owned by same family since. Shipping and payment: buyer pays for shipping, clear title will be transferred. This vehicle will be sold as-is. Feel free to email with any questions! Anecdotes on Isuzu VehiCross - courtesy of "http://www.theautochannel.com/vehicles/new/reviews/1999/solo9940.html" and Wikipedia: Once in a while, a manufacturer's "Concept Car" display at a show draws an unusual amount of attention. This is true of Isuzu's VehiCROSS, an "unusual" looking SUV unveiled at the 1997 Tokyo Auto Show where it received rave reviews. Based on the stubby two- door Isuzu Trooper, it was futuristic enough as well as affordable enough to see limited production worldwide. OUTSIDE -VehiCROSS looks like no other SUV on the road today. It is short and stubby, with a sleek, slicked-back profile and a pair of snake-eye headlights that extend into the hood line while its grille contains what looks like a set of painted fangs hanging from the top. The unpainted lower half of the body is made of a scratch and dent- resistant polymer material, seemingly held in place by exposed Allen screws spaced at various intervals around the body. The fuel filler cap looks like it belongs on an airplane. Washboard ribbing on the doors give it a "tough" look, while a bulge on the rear door contains a spare tire within the door itself. Polished 16-inch alloy wheels and mud and snow tires are standard. INSIDE -A pair of Recaro bucket seats are both supportive and comfortable. Covered in black and red leather, their heavy bolstering means that drivers and passengers won't slip away during heavy cornering and off-road maneuvers. The door trim has retro, faux carbon fiber inserts, but the dashboard and shifter don't match its spectacular exterior and appear to have been lifted directly from the Rodeo. It holds four adults...It is well equipped with standard items, among which are air conditioning, power windows, outside mirrors and door locks, intermittent wipers, tilt steering and an AM/FM/cassette stereo. Back seats fold all the way down and provide a huge trunk space. ON THE ROAD -A 3.5 liter V6 engine provides power for VehiCROSS. It uses double overhead camshafts, 24 valves, a variable intake system, electronic fuel injection and coil-on-plug ignition. It produces 215 horsepower and 230 pound-feet of torque, though VehiCROSS's nearly 4000-pound curb weight saps mostly of its zoomy potential. A four-speed automatic transmission is the only gearbox available, and it features a winter mode to reduce wheelspin on icy roads. Also standard is Isuzu's Torque-On-Demand four-wheel drive system which senses impending wheel slip and automatically sends power to the front wheels, up to 50 percent if needed. This system requires no driver input, but if a particularly sticky off-road situation arises, VehiCROSS also offers a driver- selectable Four-Low mode for extra torque. During around-town normal driving, VehiCROSS is in two-wheel drive, however. BEHIND THE WHEEL -VehiCROSS rides on a full-length truck-type ladder frame and uses double wishbone independent front suspension with a solid rear axle. Like many of today's SUVs, there are torsion bars up front while the solid rear axle rides on coil springs, and is located by long radius arms and a lateral link. Unique to the industry, however, is the use of sophisticated aluminum shock absorbers with separate expansion reservoirs. This type of shock is used on many cross-country motocross motorcycles, and the goal is to separate the oil and gas inside the shock to eliminate foaming or cavitation. This system gives better rebound and damping, especially when the VehiCROSS is taken off-road where multiple bouncing and unusually long shock travel would wreak havoc inside a conventional unit. Heavy sway bars both front and rear give VehiCROSS the ability to stay flat and poised during hard cornering. The ride is firm but well-damped. Sharp, accurate steering gives good on-center feel, while four-wheel disc brakes and an anti-lock braking system (ABS) provide nearly fade-less, positive braking power. Awards: Motor Trend featured the VehiCROSS on its May 1999 cover, and included it in its "Top 10 Sport Utilities" for Most Unique Styling. Stage 2 and 4 Class Winner, 1998 Paris-Dakar Rally Class Winner 1999 Australian Safari Rally Winner "Most Unique Styling" Motor Trend 1999 Top 10 Sport/Utes Used by Austin Robot Technology as foundation for robotic VX in 2005-2007 DARPA Grand Challenge Four Wheeler featured the VehiCROSS as the "First Runner Up" for Four Wheeler of the Year in 2000 behind the Tahoe Z71; when pitted against: Chevrolet Tahoe Z71, GMC Yukon, Nissan Xterra, Ford Excursion and Mitsubishi Montero Sport. The VehiCROSS scored highest of all 6 Mechanically, for Trail Performance and Highway Performance. Specifications: Manufacturer's Suggested Retail Price $ 28,900 Engine Type DOHC 24-valve 3.5 Liter V6 w/SMFI* Engine Size 213 cid/3494 cc Horsepower 215 @ 5400 RPM Torque (lb-ft) 230 @ 3000 RPM Wheelbase/Width/Length 91.8"/70.5"/162.6" Transmission Four-speed automatic Curb Weight 3952 pounds Fuel Capacity 22.5 gallons Tires (F/R) P245/70R16 mud/snow Brakes (F/R) Disc (ABS)/disc (ABS) Drive Train Front-engine/four-wheel-drive Vehicle Type Four-passenger/three-door Domestic Content 10 percent Coefficient of Drag (Cd.) N/A PERFORMANCE EPA Economy, miles per gallon city/highway/average 15/19/16 0-60 MPH 9.0 seconds 1/4 (E.T.) 18.0 seconds @ 80.0 mph Top-speed 110 mph * Sequential multi-point fuel injection