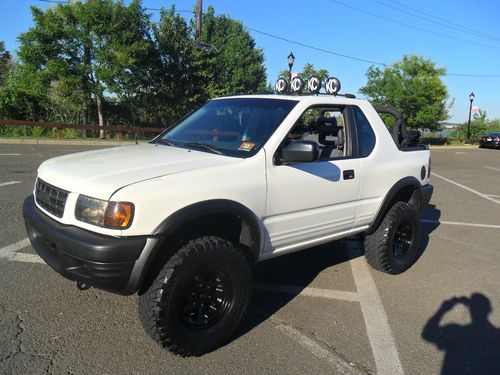 No Rot underneath, had factory recall service done for that problem (have paperwork)

KC light are not currently wired up.

Some dents door dings, both fenders and a pillar have small dents on top (see pics) from a tree branch, windshield and hood were also replaced.

The Fuel sender works intermediately, which cause's the fuel gauge to read inaccurately.  When this happens the check engine light comes on because the pcm is reading an error from the sender unit.  The light will come on after about 100 miles after you fill up and goes off when you fill up.  It never bothered me I just used the trip meter to gauge how much gas was left, usually filled up a 300 miles traveled.   The amigo still gets around 20mpg around town.

You can feel a vibration in the steering wheel @ highway speeds, had front end checked and aligned, all was tight mechanic stated the tires were out of balance, again didn't bother me as I drove the truck seldom at highway speeds.

I bought and drove this truck as a summer cruiser for me and my family,  problem is my wife and daughter didn't like driving the 5 speed stick shift.  I really like this truck and get a lot of looks driving around, if it sells I'm going to buy another but an automatic this time.

I have the plastic windows for the soft top I just never installed them, I used the top more like a safari top.

Front/rear bumper and wheel flares were painted with bedliner