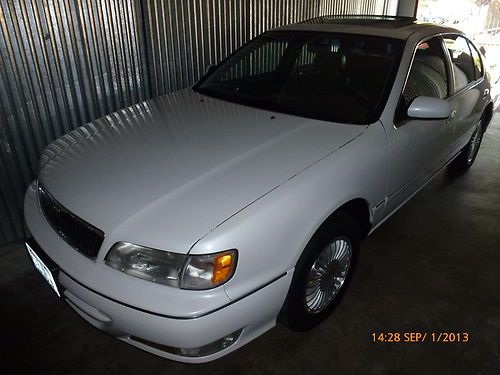 Condition: UsedA vehicle is considered used if it has been registered and issued a title. Used vehicles have had at least one previous owner. The condition of the exterior, interior and engine can vary depending on the vehicle's history. See the seller's listing for full details and description of any imperfections.Seller Notes:"Paint and interior excellent condition. Some wear on back seats and small paint cracking on both bumpers. Power antenna broken-new one included."

A VERY CLEAN I-30 WITH LOW MILEAGE. RUNS AND LOOKS GREAT-NO DRIVING OR INTERIOR EQUIPMENT ISSUES. HAVE TITLE IN HAND. WILL ASSIST WITH LOADING/PICKUP. ALL GLASS IN EXCELLENT SHAPE. BOSE SOUND WORKING FINE. ALL TIRES 75% OR BETTER. GETS 28 MPG HIGHWAY, 22 CITY. JUST A VERY WELL BUILT RELIABLE AND COMFORTABLE CAR FOR NOT MUCH MONEY.