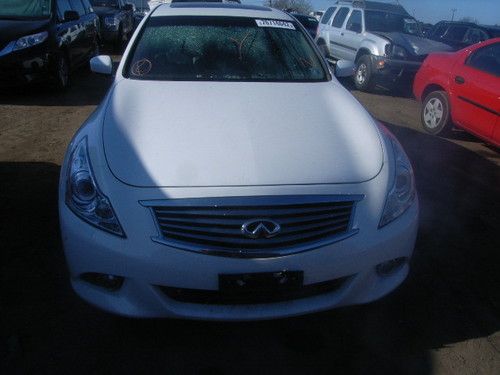 UP FOR SALE G37X , SALVAGE , ODOMETER UNKNOW - PAPER WORKS SAID 15K MILES, CAR DO NOT RUN , I HAVE KEY FOR IT BUT NOTHING WORK , DONT KNOW THE PROBLEM.OVERAL FEW DINGS AND SKRACHES, SORRY DONT HAVE ACTUAL PICS. NOW IT IS NICE DRY AND CLEAN . CAN SEND MORE PHOTOS LATER IF SOMEONE ASK . WELCOME TO CHECK CAR BY PERSON.

Infiniti's Direct Adaptive Steering (DAS) is quite a novelty - the system employs no physical connection between the steering wheel and the front wheels under normal circumstances and instead relies on a computer, clutch and steering-angle actuator to guide vehicles down the road with input from the driver.
In our First Drive review of a 2014 Infiniti Q50 equipped with the system, we weren't overly impressed by the artificial feedback. But we can't help but be impressed with how long Infiniti spent on its development: a full 10 years, according to Autoline Daily in the video report below. A staggering 70 percent of the research and development time spent on DAS was devoted to getting the steering feel right, and unfortunately, our first impression suggests their results still leave something to be desired, as we found it lacked the sporty feeling a sport sedan should have.
The weight of DAS is comparable to that of a conventional steering system due to its complexity. For example, three ECUs are used in the first-generation DAS system to ensure there's never a loss of steering, but Infiniti is refining the technology and is working to simplify it to reduce weight. One day Infiniti hopes that only one ECU will be needed to control DAS. We just hope it doesn't take the Japanese automaker another ten years to get the steering feel right.