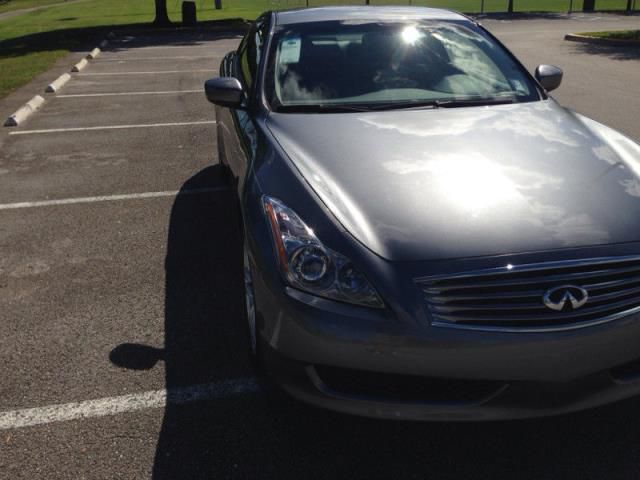 2010 Infiniti G37 Coupe Base Wow! Here we have an awesome super low mileage 2010 Infiniti G37 Coupe. The car has 19,000 miles on it , its basically almost new. The car has the remainder of the factory warranty which has about a year left on it. This is an amazing car. V-6 power, leather interior, aux input, loads of power windows, power door locks, power mirrors, cruise, auto tranny with sport shift, alarm system, keyless entry and start, xenon headlights and more. The car rides and shifts like new, ice cold ac, tires are in great shape. The seats barely show any wear and the back looks like it was never sat in. The car still smells new. The leather is nice a soft and is in awesome shape. The steering wheel even looks like new with no wear at all on it. All electronics work properly. comes with 2 keys and all the owners books even the infinity pen is still in the books. The car has been serviced at the local Infiniti dealer and was a garage kept car.With this car you are getting an almost new babied G37 coupe at a fraction of the cost. If your looking for a G37 super low mialage coupe in almost new condition then this is the one for you. This car is really fast with lots of power. BRAND NEW TIRES AND WINDOW TING ALL AROUND. THIS CAR NEEDS NOTHING. THIS CAR IS IN EXCELLENT CONDITION. THIS IS THE G37 YOU HAVE BEEN LOOKING FOR . BID TODAY AND GOOD LUCK . BEST OFFERS ACCEPTED. THE MILEAGE WILL VARY A LITTLE BECAUSE THE CAR IS DRIVEN AND THE TIME THE AUCTION WILL END. V6 Auto 7 speed tranny Power Seats Power Windows Power Mirrors Power Windows Leather Trip Computer XM Satellite LCD Screen for audio/ac ABS Xenon HID Head Lights Low miles Cruise control Leather Steering Wheel

Infiniti hybrid sports car coming by 2016 after all?

Infiniti makes plenty of good cars, crossovers and SUVs. The premium Japanese brand also has a well-defined presence in racing on the world's largest stage in the form of a partnership with Red Bull in Formula 1. What Infiniti doesn't have, though, is a range-topping halo car.
A report from Autocar in the UK suggests that Infiniti's gaping top-shelf hole may soon be plugged by 2016 with a new hybrid sports car along the lines of the well-received Emerg-E and Essence concepts. This report is contrary to news we heard from Autocar late last year, when company officials reportedly told the publication that a swoopy and fuel-efficient machine like the Emerg-E wouldn't be produced.
Interestingly, Infiniti is said to sense strong demand from so-called "little emperors ... who are used to getting what they want," many of whom live in Asian countries, who are also environmentally conscious. Infiniti exec Andy Palmer told Autocar to expect something "like the Tesla sports car option, but with more flexibility in terms of range."