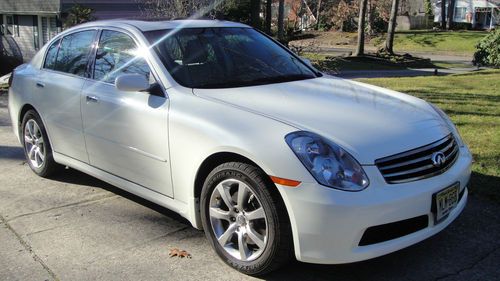 I have owned this car since 2006.It had 9k miles when I bought it.It had light front end damage. The bumper cover,grille, and radiator were replaced with new oem parts. Also replaced the hood, which had only slight lip damage,it is aluminum and I did not want any problem . The paint is in excellent condition except for a pencil point size stone chip on the front fender.The interior is also clean and in great shape . No one has smoked in the car since I owned it. There is a couple curb scraps on two of the alloy wheels. The tires are new goodyear assurance touring. The car runs perfect. I have always used castro synthetic motor oil, changed every 5k miles.The sound system is AM FM 6 Dic CD .The 3.5 6 cyl.puts out 270 HP,and is very responsive, yet gets great fuel milage.I always use premium fuel.It has been a trouble free car for me for over six years.

Alongside the updated Q70, Infiniti has refreshed its fullsize SUV, the QX80, for the 2014 New York Auto Show. Like its freshened sedan, the QX80 is full of incremental styling tweaks typical of a mid-cycle update like this. Also like the Q70, there's a new member of the QX80 family for the 2015 model year.
But first, the overarching changes for the QX80 range. As we said, this is pretty standard fare, with new headlights and taillights and a restyled grille designed to fit the full-sizer in with the most recent Infiniti design language. Full LED headlights, turn signals and fog lights should provide a bit more illumination, while the mesh inserts on the "double-arch" grille remind us of the Q50. Still, this is a rather bulbous, inelegant piece of design in our eyes. Out back, the shape of the taillights has been tweaked, and they now sport LED illumination. The new rear bumper is larger, as well.
In the cabin, upgrades are similarly sparse. There are a few new tech items, like automatic high beams and predictive forward collision warning. Overall, though, this is the same wood-and-leather-lined cabin Infiniti has been selling for the past few years.