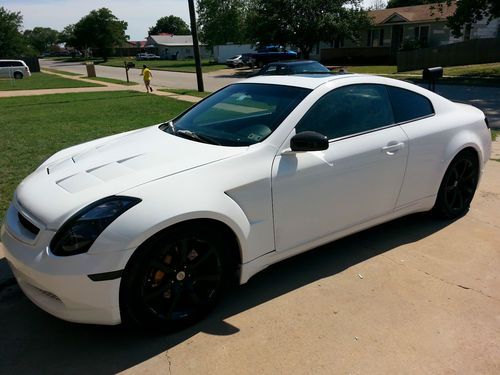 Condition: UsedA vehicle is considered used if it has been registered and issued a title. Used vehicles have had at least one previous owner. The condition of the exterior, interior and engine can vary depending on the vehicle's history. See the seller's listing for full details and description of any imperfections.Seller Notes:"04 g35 coupe regular wear for vehicle see full description."

Serious bidders only who have the funds to purchase.

For auction is a nice low mile 2004 Infiniti G35 2-door premium sports coupe  6-speed manual brembo brakes, black heated leather, power sunroof  and all power options with only 77,000 miles. This car runs and drives good.The a/c is cold and works great.It does have a Oklahoma rebuilt title.The car was painted white by previous owner,use to be silver, they did all jams/trunk and looks pretty good.It has Firehawk tires that have very good thread left on all 4 wheels.

The exterior is nice, as any used vehicle expect couple small rock chips.The interior is in good shape and average wear an tear for vehicle of this age, carpet is good.

The airbag light is on, probably just needs the module reset which is cheap fix if you want that off. Everything works good and car is mechanically good and ready to drive anywhere.

If you have questions ask before bidding and serious bidders only.

I am a Texas Liscensed dealer, if you live in Texas you will pay the TT&L (Tax,Title & liscense fee), if you are out of state you will be responsible for registering in your own state. Serious bidders only and if you have questions let me know thanks.