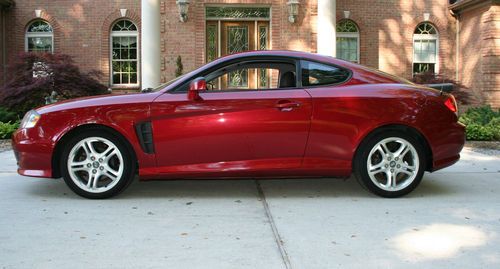 One owner, my daughter. Drove to college 4 years then to work, mostly highway miles. She drove it with care and I took good care of it. You do the same it will last another 100,000 miles.

I have my own shop, oil was changed every 4 to 5000 miles without fail and car was gone over each time. I replaced timing belt at 80,000 miles as recommended and replaced water pump while front of motor was apart.
Garage kept, car is in excellent shape,I don`t know of anything wrong. Interior is nearly perfect even drivers seat shows little wear. Exterior is very nice, one small scratch on front bumper and one on rear will not even
show up in pictures. One rim has a scratch just trying to be honest. All tires good, Va. inspected in Feb. This is the one you have waited for, if I had a use for it I would keep it myself.
2.7 V6 Automatic,four wheel disc brakes, 17" alloy rims, rear window defroster,heated power mirrors, power windows, power door locks with remote entry, dual front and side airbags, leather seats with sport grip inserts,
leather steering wheel, intermittent wipers,adjustable sterring, cruise control, automatic temperature control, am/fm/cd/ cassette with 6 speakers,remote fuel door,split folding rear seats, original carpeted floor mats.
Was asked about AutoCheck showing a accident, car was bumped in parking lot in front of drivers rear tire, was minor, had it professionally done about 4 years ago, I guess they reported it as a accident.

The reality of growing up and living in Detroit is an interesting one. You're essentially born with minute traces of gasoline in your veins and everyone you know is associated with the auto industry in some way. That's not an exaggeration. They might be the child of a line worker at the local auto plant, or they may hold down a job at a restaurant frequented by employees at a big supplier, but no matter what, everyone is part of the auto-industry ecosystem.
Because of this, the stories you may have heard about Detroiters and their distaste for foreign cars is, frustratingly, true. Simply put, Toyota and Honda are blatantly disliked by most, while BMW and Mercedes-Benz are merely tolerated. For a car reviewer who prides himself on making egalitarian recommendations, it's a frustrating environment to live in, particularly when friends and family ask that inevitable question - which is followed by an equally inevitable qualifier - "What should my next car be?" and "One more thing - it can't be foreign." It's this attitude that's perhaps the reason no one I know even considered buying a Hyundai Elantra.
Despite the fact that the compact sedan is built in Montgomery, AL and that Hyundai maintains a shiny, new, sprawling tech facility less than 45 minutes outside of downtown Detroit, the Elantra's status as a "foreign" car immediately precludes it from most Motown buyers' shopping lists. This is to their detriment, as I discovered during a week of testing the refreshed-for-2014 Hyundai Elantra.