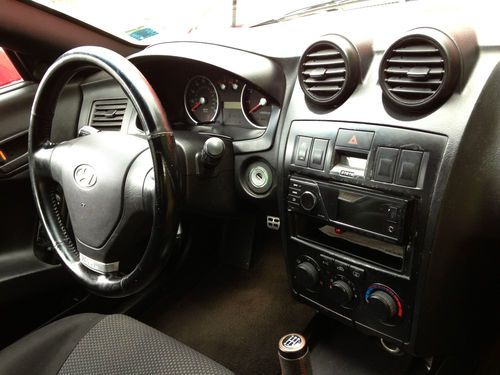 I am selling a 2003 Hyundai Tiburon GT (Standard 5spd) It is in good condition and runs great. I have recently replaced the serpentine belt, crank pully, and E-brake cable. The frame has been taken out and inspected for rust (none). The underneath of the car has a rust protectant rubber sprayed on it. I have an aftermarket short ram intake and DNS cat back, I also have headers and Y pipe that i havent had time to put in. There are 5600k blue low beam headlights with an extra set. I also have a blue LED dash conversion kit and seat covers that I will give with the car. I have and aftermarket pioneer deck which was ($300) and pioneer speakers that were ($75each), and and aftermarket shift knob. I have also painted the rims black and calipers red all the rotors and pads were replaced mid last year and there is fairly new falken all season tires on the car 70% tread. The oil was changed about 1000 miles ago. It has approx. 122xxx miles, mostly highway. If you have any questions or want more pictures feel free to call or text 518-536-0525 (Cole). Asking $4400obo

There's little question that Hyundai has emerged as a tuner's favorite, and few have pushed the limits quite like John Pangilinan. The SEMA stalwart is known for turning out candy-colored Korean tuning jobs, and has now teamed up with Hyundai for this bright blue Genesis coupe.
Set to debut next month in Vegas, the JP Edition Genesis Coupe features flared fenders designed by Jon Sibal, a carbon aero kit and custom headlights, topped off by by an Atlantic Blue metallic paint job with custom graphics. But that's just what you can see. Under the hood, the JP Genesis packs an AEM cold air intake, ARK Performance exhaust, turbo downpipe, KW coilover suspension, Whiteline sway bars, ARK strut, 19-inch forged alloys, Toyo rubber and Brembo brakes.
Inside it's got Recaro buckets, a racing harnesses, GoPro camera, Alpine sound system and Katzkin suede and leather upholstery. The finished package will be on display at SEMA, but in the meantime you can scope out the full details in the press release below.

The Walking Dead, the hit zombie apocalypse show on AMC, has enjoyed a marketing tie-in with Hyundai for two seasons now. If you've watched the show, you'd no doubt seen Rick Grimes, his sociopath-in-training son Carl and emerging hero Glenn Rhee avoiding the dead behind the wheel of a light-green Hyundai Tucson. That relationship expanded beyond the show when Hyundai brought an Elantra Coupe-based Zombie Survival Machine to last year's San Diego Comic-Con.
For this year's Comic-Con, the new Zombie Survival Machine is just a touch faster, funkier and deadlier. Based on a Hyundai Veloster Turbo and built by Galpin Auto Sports to decapitate as many Walkers as possible, this four-door hatch has been heavily modified. The headlights, taillights and windows are all protected with a combination of wrought iron and chainlink fencing. There's also plenty of armor on the body panels.
Passive zombie killing features abound, like the "horde plow" on the front bumper and sawblade grille. But by and large, the majority of the Veloster Turbo Zombie Survival Machine's offensive power comes from a combination of firearms and chainsaws. A .50-caliber machine gun is mounted on the roof, along with a pair of assault rifles on the hood. Each door features blades along the base and a machine gun. Melee weapons can be found in the back, including a spiked baseball bat or katana.