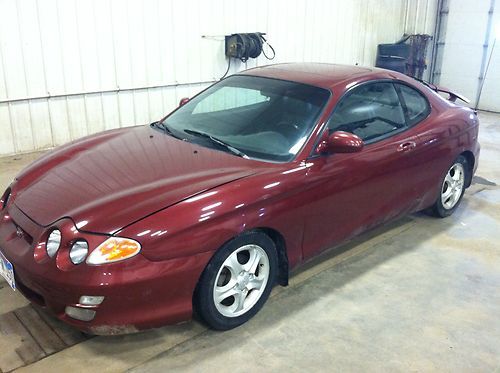 2000 Hyundai Tibaron 2 door coupe
Only has 130500 miles.  Run and drives, good little commute car. Has dents on hood, right front fender and rear left by taillight. Interior is ok, has leather seats and shows some ware. Most recently was used for short work commute after sitting for afew months.  Has new rear brakes, battery and all fluids changed.

Selling car as is, has no warranty.
any questions call 6053802339 or come look for yourself.
Will accept cash or paypal only.

Hyundai Genesis gets stanced by Ark Performance for SEMA

Hyundai has yet another high-performance concept for the upcoming 2014 SEMA Show in November to join its 708-horsepower Sonata. For this one, Ark Performance is taking the Genesis Sedan and pumping up the output by supercharging its 5.0-liter V8, along with a mile-long list of other modifications to mix speed with added luxury.
Ark calls the tuner concept the AR550 in reference to taking the Genesis' standard 420 horsepower V8 and boosting it an extra 130 hp with a Rotrex supercharger to bring total output to 550 hp. The mill also benefits from a freer breathing intake and exhaust, new engine management and more.
All of that extra power would be nearly useless without upgrades elsewhere to handle it, and Ark has some big additions to include. The one-off rides on an air suspension system and stiffer front and rear sway bars. To bring things to a halt faster, larger brakes from Brembo replace the standard units.