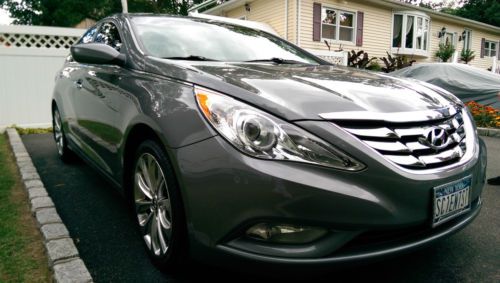 If there was no Hyundai badge, the front end styling of the Korean automaker's new China-only Mistra sedan could have fooled us into thinking it was a refreshed Nissan Altima. Walk around for profile and rear-end views, and we can see more than a bit of Azera in the newest Hyundai, too.
But the Mistra is indeed made for the Chinese market, Carscoops reports, and with a 185.6-inch length, 109.1-inch wheelbase and 71.7-inch width, in size it slots right between the Elantra and Sonata sedans. On the outside, the Mistra maintains Hyundai design cues but loses some of the swoopy styling employed on the Elantra and Sonata for more straight lines and angles.
The Mistra carries its more-restrained-than-Sonata looks to the interior, where occupants will be pleased to find brushed aluminum-look accents on the dashboard, some nice-looking wood trim (if that's your thing) and an easy-to-read instrument cluster with a digital center readout, similar to that in the Genesis sedan.

Hyundai has taken the unusual approach of debuting a newly refreshed model - the refreshed 2015 Hyundai Azera - at the Miami International Auto Show instead of one of the larger usual suspects (the LA Auto Show is just around the corner). According to Hyundai, Florida is a large market for the Azera sedan, which surely had something to do with the decision to debut in Miami.
There aren't many big changes to the Azera for 2015, but what has been updated is meaningful, starting with redesigned front and rear fascias, standard 18-inch alloy wheels and LED fog lights on Limited models. Inside, an eight-inch display - all the better to work with Hyundai's latest Blue Link system - joins a new center stack design as notable improvements. On the safety front, Blind Spot Detection with Rear Cross Traffic alert and Lane Change Assist are now standard.
Power still comes from the well-regarded 3.3-liter V6 with 293 horsepower and 255 pound-feet of torque. While none of the changes for 2015 are likely to make the Azera into a best seller in the highly competitive large-car market, where models like the Chevy Impala, Toyota Avalon and Buick LaCrosse live, not to mention Hyundai's sibling from Kia, the Cadenza, we're sure Azera buyers will be happy with the updates all the same.