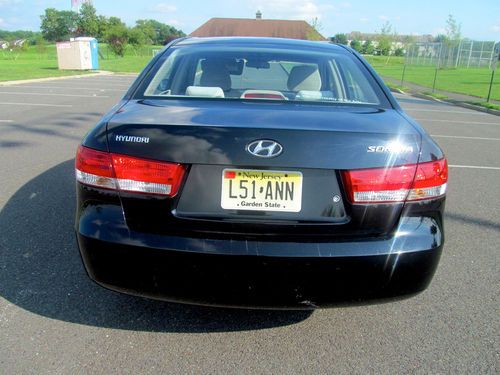 Condition: UsedA vehicle is considered used if it has been registered and issued a title. Used vehicles have had at least one previous owner. The condition of the exterior, interior and engine can vary depending on the vehicle's history. See the seller's listing for full details and description of any imperfections.Seller Notes:"Very minor scratches on the body."
I am selling my black, 2006 Hyundai Sonata. I really love this car and it shows by its great maintenance. It looks like it was barely used. My absolute favorite thing about this car is how efficient it is on gas. Two hours on the road requires only a quarter, 1/4 of tank. I installed a touch screen car stereo. New tires, brake lights, and tail lights were all installed within the past 2 years. The trunk is so spacious, and the seats have a lot of leg room as you will see in the pictures. It has 108,500 mileage. The price is set and only those intending on paying full should message, text, or call me for more inquiries if needed 609-496-3334.
4-wheel ABS Brakes
Manufacturer's 0-60mph acceleration time (seconds): 7.2 s
Horsepower 162 @ 5800 RPM
Torque 164 @ 4250 RPM
Valves Per Cylinder 4
Total Number Valves 16
Drivetrain FWD
Fuel Capacity 17.7 gallons
Overall Length 188.9 inches
Height 58.0 inches
Tires / Wheel Size P215/60R16
EPA Trunk or Cargo 16.3 cu.ft.

After we posted the renderings of the 2015 Hyundai Genesis last night, Hyundai issued a full press release revealing some of the details about its next-generation sedan. Set to make its debut at the Detroit Auto Show in a few months, the 2015 Genesis promises to bring a whole new level of styling and technology to the Korean automaker's portfolio.
Hyundai says that the design used on this car is part of its Fluidic Sculpture 2.0 language that we expect to slowly make its way across the entire lineup. Major styling changes include a taller, upright, single-frame grille (think Audi), larger headlights, sharper body lines and the swept-back, couple-like roofline. Except for spy shots, we still have no clue what the interior of the new Genesis will look like, but Hyundai says the sedan will be more intuitive for drivers to interact with. On the Genesis-foretelling HCD-14 Concept, this included a head-up display, as well as eye- and hand-gesture recognition.
For the drivetrain, Hyundai hasn't revealed much, except that the 2015 Genesis will get an all-new HTRAC all-wheel drive system. The sedan should also be better to drive, thanks to a more even weight balance, a stiffer chassis and Advanced Traction Cornering Control (ATCC) electronic suspension. Replacing the electro-hydraulic power steering system in the current model, the new Genesis will get a full-electric, rack-mounted power steering system. For more info on the upcoming 2015 Genesis sedan, check out the full press release posted below.