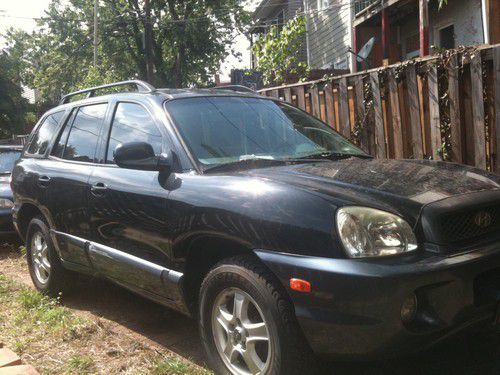 2003 Hyundai Santa Fe in good condition. The car has been only lightly used in the past 2 years, hence my desire to sell it as I have little use for it. I am the only previous owner of the car. It has never been in an accident or experienced any technical issues. To prepare for the sale, the battery has been replaced, the engine checked, and the oil changed. The Listed price is $700 BELOW the Kelley Blue Book Value given the vehicle equipment, mileage and condition: Good. -V6, 3.5 Liter Engine -4WD -Air Conditioning -Power Windows -Power Locks -Cruise Control -Dual and Side Airbags -Privacy/Tinted Windows -Roof Rack -New, Premium Wheels -Automatic Transmission -Traction Control -ABS (4-Wheel) -AM/FM Stereo -CD and Cassette equipped Please respond with Interest. Serious Inquiries Only.