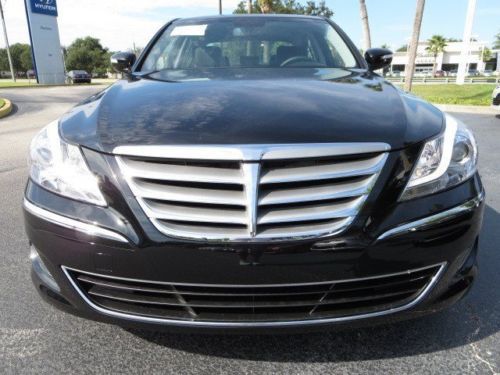 Following an investigation launched by the National Highway Traffic Safety Administration earlier this week, Hyundai will reportedly recall 27,500 Genesis sedans due to braking problems. Roughly 40,000 Genesis sedans from the 2009 model year were originally under investigation, but this official recall affects vehicles from 2009 to 2012.
A Hyundai spokesperson told The New York Times that brake fluid may cause the brake control unit valves to corrode, which reduces braking power. Affected cars will have their brake fluid replaced, and if necessary, will have the control unit replaced, as well.
The original NHTSA investigation was launched after the government agency received 23 complaints from owners citing reduced braking power and increased pedal travel. One incident reportedly resulted in a crash, while another caused a driver to lose control of the car. NHTSA has not officially announced the recall as of this writing.

Hyundai hit a home run with its current-generation Sonata midsize sedan, so don't expect the Korean automaker to make revolutionary changes when its replacement comes out for the 2015 model year. The four-door sitting in showrooms today was launched in 2010 with radical new lines that marked a big departure from its rather bland predecessor. Even with stiff competition from the Honda Accord, Ford Fusion and Toyota Camry - all newer designs than the Sonata - sales have been strong. Consumers embraced its new design language, taking home a record 230,605 units last year.
"I think we found a design language that works, the 'Fluidic Sculpture' stuff, so I would say (the new styling) is not pulling back in any way. It's more continuing to refine on that same trajectory that we're on," John Krafcik, Hyundai U.S. CEO, told WardsAuto in a recent interview. Consumers don't seem to be fazed by the its age either. "A lot of consumers are just entering (the) midsize (segment) for the first time. They don't see (the Sonata) as a three-year-old car. They see it as, 'Whoa, that's a pretty good-looking midsize car,' so it's doing quite well," added Krafcik.
Sonota sales have been down over the last few months, but Krafcik says that is a reflection of the automaker's decision to increase production of its Elantra compact at the Montgomery, Alabama, plant - where both are built - and a limited supply of its mid-grade GLS Sonata model.