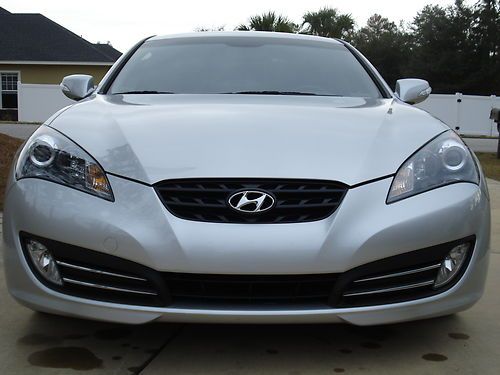 Chance to own a beautiful like-new sports car, now at very low reserve, and low buy it now. This same car retails for over $22K.
Buyer fell through, so re-listing for great opportunity to own this 2nd-owner, smoke and accident free Genesis Coupe top of the line model, Grand Touring. It is loaded and has everything except NAV. You can email me at gebocala@yahoo.com for further questions.
I will be of assistance in any way to help buyer with shipping arrangements, etc.

Financed Through Local Credit Union - Contact me (Jerry) for more details or to answer any questions at 352-804-3189.

The National Highway Traffic Safety Administration has slapped Hyundai with a $17.35 million fine for delaying a recall on the 2009 to 2012 Hyundai Genesis sedan back in 2013. The recall grew from the original figure of 27,500 units to 43,500 sedans in November of last year, and focused on brake fluid that wouldn't prevent corrosion of the hydraulic control unit.
"Hyundai remains committed to making safety our top priority, and is dedicated to ensuring immediate action in response to potential safety concerns including the prompt reporting of safety defects," David Zuchowski, Hyundai's president and CEO, said in a statement.
Hyundai originally issued a technical service bulletin warning dealers to replace brake fluid. This was expanded to a full recall following NHTSA's involvement.

Is Hyundai's conservative new Sonata struggling out of the gate?

"But so far, Sonata sales are up compared with last year even while we're still ramping up to full speed," - Jim Trainor
According to Reuters, the redesigned-for-2015 Hyundai Sonata is not enjoying the same degree of success in the early going as the previous sixth-gen model, which proved to be one of the most important models in the company's history and ushered in the company's so-called "Fluidic Sculpture" design language that we still see today. Citing a recent review from The New York Times that called the car's more conservative styling "bland" and "boring," Reuters also points to analysts who claim the higher price of the new Sonata, as well as smaller rebates and incentives, are hurting sales. Honda and Toyota both offered anywhere from $600 to $800 more on the hoods of their Accord and Camry sedans last month.