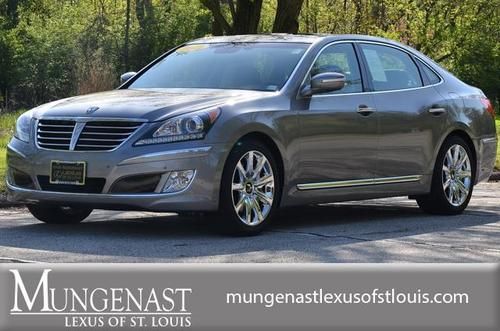 The big guns are starting to roll out at the 2013 SEMA Show in Las Vegas. This is the Bisimoto Hyundai Genesis Coupe, the promised 1,000-horsepower monster that was first shown at the end of September. We ventured across the SEMA floor to get an up-close look at this hugely powerful two-door.
The list of aftermarket parts fitted to this Genesis Coupe is extensive, ranging from that huge intercooler up front to a pair of Bisimoto/Turbonetics turbochargers to an AEM engine management system, all of which allow the 3.8-liter V6 to produce upwards of 1,000 hp. A full roll cage and Buddy Club seats and harnesses are fitted to the cabin, while a coil-over suspension blesses this Genny with some extra agility. We don't know what size Toyo R888 R-Compound tires those are, but as they're fitted to 20x11-inch wheels in back and 20x9.5-inch wheels in front, we're betting they're huge. We've got a full list of aftermarket goodies in the press release below.
We also have a full gallery of live images of the Bisimoto Genesis on the SEMA Show floor up top, so be sure to hop in and take a look at just what kind of potential can be found in this two-door Korean sports coupe.