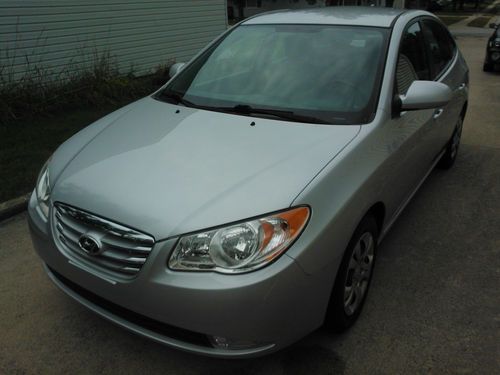 You are bidding on a silver 2010 Hyundai Elantra. I purchased this vehicle in February 2011 with 49,000 miles on it. Since then it now has 98,983 which is mostly highway miles. This car is in great condition inside and out. The interior is clean aside from 3 burn holes in the driver seat (please see photo). It was not from smoking but due to a damaged phone charger cord. Besides that the rest of the interior is clean. As for the outside there is a small dent on the passenger side rear quarter panel, looks as if most of this could buff out. Besides that everything else with this car is fine. Mechanically it is sound, no issues or lights. The reason I am selling is that we have an addition to the family coming and it is time to start looking at a larger vehicle. If you have any questions, please feel free to send me a message and I will try to respond as soon as I possibly can. Thanks for looking and happy bidding!!!

Hyundai is locked and loaded to debut its redesigned, 2015 Sonata at the New York Auto Show next month. For one enterprising Korean photographer, however, the reveal just couldn't come soon enough.
A South Korean website called Bobaedream.co.kr unceremoniously published some images of what would appear to be a completely undisguised example of the new Sonata. Korean Car Blog quickly followed up on the leak, claiming that the car in question was fitted with Hyundai's 2.0-liter turbocharged GDI engine, making 274 horsepower, and connected to an all-new, seven-speed dual-clutch transmission.
Whether that information came from a reliable insider source (as the photos would suggest) or was just a best guess, we can't say. But we can see what direction Hyundai is headed in with the Sonata. The front end seen in the spy shots is more or less what we'd already seen in the last teaser picture, with a new headlamp design helping to set off a prominent grille. The grille does seem to have some element of the strong, graphical surround from the teaser, too, though it's not as defined in these low-resolution pictures. Sheetmetal on the hood and bodysides seems cleaner, straighter and less fussy than in the current car, too. As for whether or not this is the Korean-spec car or the one destined for the US market, that's unclear, though we have been told that the two cars do look very similar.

The new Hyundai Sonata just made its debut at the 2014 New York Auto Show, but it's already begun making its slow march towards dealers, meaning it's about time we start seeing ads for the new family sedan on the TV and internet. This 62-second spot is one of the first.
The ad places a particular focus on styling, and what great design really is. There's also a glimpse at the super-cool gesture control that's baked into the Sonata's infotainment screen. We'll admit, we're pretty geeked to give this feature a full test once we finally drive the all-new sedan.
As for when that will be, with the car set for an arrival at dealers this summer, we're hoping to have a full write-up on the 2015 Sonata soon. Until then, scroll down for the full ad from Hyundai.