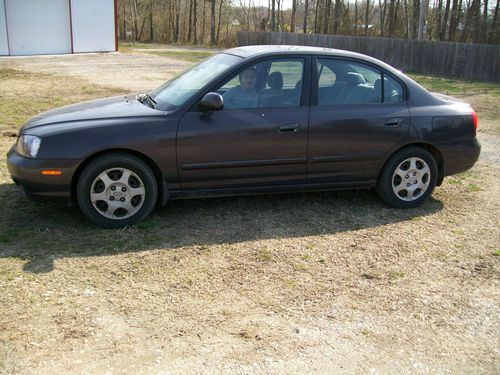 You are looking at a 2001 Hyundani elantra gls in good shape.  The car has 124,500 mi on it and it runs great.  I just had the timing belt and water pump replaced @ 124,000 mi so it is good for another 100,000 miles.  I also replaced the battery in Jan along with the front half of the exhaust with a stainless braided flex pipe with a new 02 sensor due to it was starting to break due to rust.  The car has had a lot of new parts added in the last 3 years to include the alternator, engine belts, axle shafts, coolant hoses, tires, front and rear breaks, rear wheel cyclinders, front brake rotors, speed sensor,and  fuel filter.  I also have had the car well matined and had fluids changed and filters changed at every guidline.  The transmission was flushed last fall along with the coolant system. I am the third owner of this car, I bought it from my brother in 2009, he bought it from Chester town chrysler jeep in 2005 and was told it was an one owner local trade.  The car also has had a poineer cd player with remote and ipod connector added to replace the factory tape deck back in 2005.  We are selling the car due to we just bought a new one to relace it.  The car does have some blemishes on the paint and wear spots.  The back bumper has three spots where the paint is wearing off and the door handle trims are also wearing.  Overall this is a good car that has not let me down and was used to commute a hour one way to work 5 days a week.  This will make some one a good car so bid with confidence. Thanks for looking.

The car is for sale locally so if it sells before the end date  I will cancel the auction early.

Hyundai i20 WRC gets shakedown in Finland

It's always a good day when we get to post a video about rally racing. It's even better when that video is of a new WRC competitor undergoing testing. This spy video shows Hyundai's i20 WRC, a car that debuted nearly one year ago at the 2012 Paris Motor Show. It's set to usher in Hyundai's return to top-flight motorsports, and will do battle with the cars from Citroen, Ford and Volkswagen that are currently contesting the 2013 season.
This video, which shows the i20 testing on the notoriously tough Finnish rally stages, gives the impression that progress on the new WRC contender is going well. It certainly looks fast, and as with the vast majority of rally cars, it sounds absolutely wonderful (listen to some of those gun-shot-like backfires). Take a look below for the whole, glorious three minutes and 20 seconds of unadulterated rally noise, flying dirt and jumping.