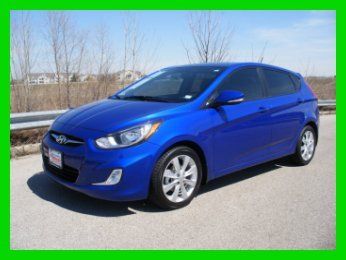 Hyundai brought a pair of very yellow Velosters to this year's SEMA Show. The first is the car you see above - the Veloster Hylighter. Built in a partnership with aftermarket accessory supplier EGR Group, it's based on a Veloster Turbo, but has been extensively modified for its trip to Vegas.
The paint, a custom color called Yellowcake, a type of uranium powder used to prepare fuel for nuclear reactors, certainly catches the eye. And if for some reason it doesn't, black graphics and a LED light bar on the roof most certainly will. An EGR widebody kit has been fitted for an even bigger visual impact, while the DPE three-piece wheels add some flair. The cabin sports a pair of Takata racing seats and harnesses, as well as a roll cage from Creations n' Chrome.
The engine is an uprated version of the turbocharged, 1.6-liter engine found in the standard Veloster Turbo, but it's been fitted with an AEM intake and a MagnaFlow exhaust, for a bit of extra oomph. A coil-over suspension from ARK, an AEM strut-tower bar and Toyo Proxes R888 tires afford a bit more handling potential for the VT, while a Brembo brake package can bring things to a rapid halt.