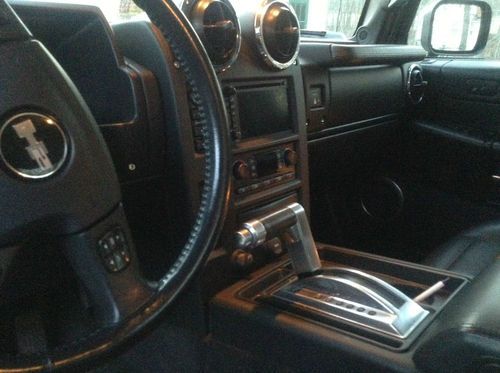 I have a HUMMER for sale 2005 69xxx miles everything works as it should I am selling it to pay for college since the TA was cut for military now I have to defend the country and pay for my own School. Please bid with confidence knowing this is a solid vehicle I used as a daily driver with zero problems. It has a 8 out of 10 exterior and a 9 out of 10 interior Navigation New brakes and Battery. If you have any questions please call 4342949118.  This is truck now resides in virginia but was a winconsin truck so it has seen salt and snow and has a little rust on the powder coated black on the bottom but none on the car itself the dealer told me they could respray this for around 450 so i took that out of the price there is also some oxidation on the chrome like all hummers have from 2005 I have never seen one that dosent have it but the paint shines like new and this really is a beautiful truck the pictures do it no justice everyone loves it when I clean and take it out so please bid with confidence.  For those of you who do bid know that I am a veteran and I am selling this to pay for school so please dont low ball me to death. I need at least 20,000 for this truck to move I have send plenty on here and that is the lowest price on ebay for a 2005 SUT.

Thanks for Bidding Have a wonderful day.