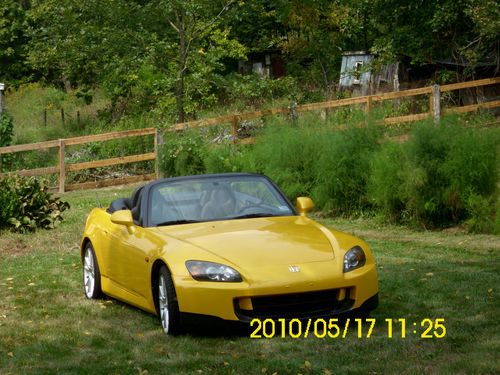 Condition: UsedA vehicle is considered used if it has been registered and issued a title. Used vehicles have had at least one previous owner. The condition of the exterior, interior and engine can vary depending on the vehicle's history. See the seller's listing for full details and description of any imperfections.Seller Notes:"This is an excellent vehicle in excellent shape. It has been garage kept during the winter months here in West Virginia. I included pictures of a very few nicks in the front bumper area.It has an upgraded (Alpine) stereo system with MP3 and blue tooth capabilities.Recently went through the checks at our school , tuned up, new tires and recent oil change.It has the boot for it and a cover as well.This car has been very well maintained and it is the best driving vehicle I have ever owned..If you have never owned one of these, please ask someone about driving this car..An awesome vehicle to drive...If there is any info you would like to know , please ask"

A beautiful well maintained car...It has been garage kept in winter months here in West Virginia
IT has an upgraded (Alpine) stereo with MP3 and Bluetooth capabilities.
Just an awesome vehicle and the most fun car that I have ever driven, You drive this car and it catches people eye all the time..A beautiful car and it handles as good as it looks.
It has new tires and recently tuned up at our school...