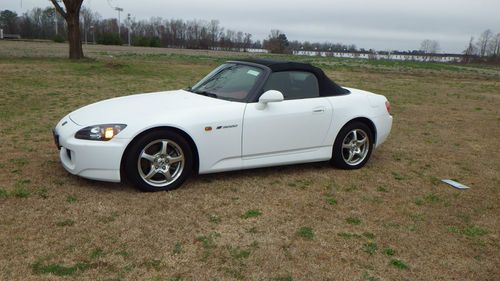 You are bidding on an absolutely beautiful, very clean above average 2002 Honda S2000.  The exterior is white and the interior is red leather. The paint is glossy throughout, no dents, dings, or scratches.  The car drives perfect with no drivetrain issues.  Engine is smooth, transmission is tight and clutch is perfect. Everything on this car works. Alloy wheels and tiresare in above averagecondition.  Has salvage title due to accident on passenger side.  Hood, front bumper, and right fender have been repainted.  All lines are even. If I didnt tell you, you wouldnt know its had any repair..  We've been in the car business for over 30 years and have never seen a salvage car that looks this good.  Car needs nothing, turn the key and drive it anywhere. I expect alot of calls and text messages, I'll answer all of them quickly. My name is Joe 252-717-1352.  We have this car advertised locally and reserve the right to cancel all bids and end the auction early if its sold before the auction ends.  We can help assist with transport or pick up from local airports.  Airport codes are RDU and PGV.