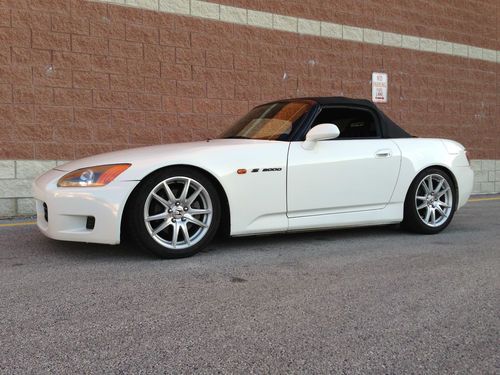 Condition: Used: A vehicle is considered used if it has been registered and issued a title. Used vehicles have had at least one previous owner. The condition of the exterior, interior and engine can vary depending on the vehicle's history. See the seller's listing for full details and description of any imperfections. ...
Its time to sell my car, I don't really want to but way too many toys! '00 S2K with 129,500 miles, very solid running condition, no leaks, no rattles, shifts-accelerates-brakes smoothly, drives straight.  I purchased this car in JAN 2013 and the goal was to make it a track car but it never quite made it to that level.  Car was originally black, previous owner repainted to GP white, I would rate the paint as a 7/10.  A few of my mods to the car:
*BUDDY CLUB N+ coilovers (80 miles since new)
*SPARCO CORSA RACING SEAT (NEW)
*BUDDY CLUB SEAT BASE/RAILS (GIVES THE LOWEST POSITION, SPARCO WAS TOO HIGH) (NEW)
*SPARCO 383 RACING STEERING WHEEL (NEW)
*MOMO STEERING HUB (NEW)
*NRG QUICK RELEASE (NEW)
*T1R EXHAUST (VERY LOUD, VERY DEEP) (USED, CLEAN)
*ARC COLD AIR INTAKE (USED)
*AP2 V1 WHEELS
*MUGEN SHIFT KNOB
*SHORT SHIFTER
*NEW TOP with GLASS WINDOW
*NEW FRONT TIRES, REAR TIRES 85%
ALL STOCK PARTS GO WITH THE SALE: AP1 WHEELS,DRIVER'S SEAR,STEERING WHEEL,STOCK EXHAUST.
NO TRADES, CLEAN TITLE
SERIOUS INQUIRIES ONLY, DON'T WASTE MY TIME!!!