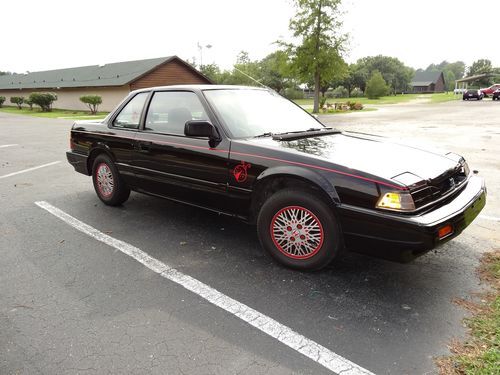 This is a fun car!  I have owned it for a couple of years, making improvements all along.  When I got it a fresh paint job had just been done by the local community college with a black and red metal flake.  I added the pin stripes and vinyl lady bugs.  All that can be removed.  The lady bugs are because wife did not want large Asian dragon that I chose! lol!  The wheels have hand painted trim.  Good tires. New brake pads and drilled and slotted rotors all the way around.   I replaced seats with 1989 seats, did not realize they would not just drop in so I had to fabricate mountings, they do not slide back and forth but the originals were shot.  I do still have them I think, at least one but I cut some mounting parts of if I remember correctly.  The windows have a legal tinting.  There is an alpine stereo and new speakers.  New floor mats.  When I got it there was a new clutch, timing belt, and the flywheel had been lightened.  I have replaced the radiator, idle air control valve, injectors, head, water pump, new exhaust with stainless headers, muffler, all the way back.  Has a good rumble that is not that cat back pooting sound.  Most of the engine still has emissions stuff,  I have also made a sort of cold air intake, just a new filter and intake arrangement really.  Powder coating and painting of engine parts. Spare clutch cable.  It needs a few things like the thermovacuum switch on the thermostat housing.  The drivers door is a pain, if you don't unlock it before  you try to open it from the inside it will stick and you will have to open the window and open from the outside- can't figure that one out. I believe some of the smog stuff still needs replacing.Sometimes it smokes until it is warm, not sure about that either with new valve seals on the head?   The compression is above 175# on all cylinders. I have not exceeded 4000 rpm. A/C works but could probably use a leak check and the fan is weak as they all are. I have added some fog lights and red ground effect lighting.  New headlights. I may have forgotten some things as I have done so much but I like it and trust it at over 30 mpg!  It is a classic head turner!   I can take more pictures if you want, I already had these on my computer.  All in all it is a fun sporty classical car!  I am only selling because I have too many and am shifting priorities to a Toyota Supra.  I am listing locally so reserve the right to sell locally.  This is an ad so make an offer.  Thanks.