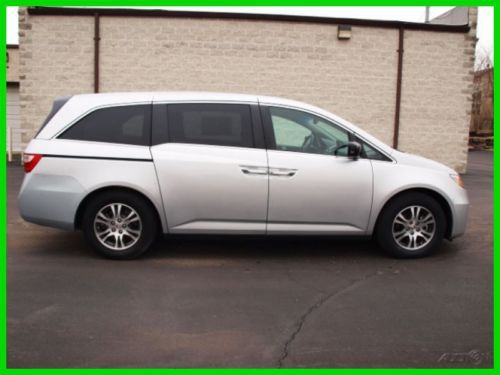 Honda has just released its new Odyssey minivan for the Japanese Domestic Market, and it has plenty of style and room for up to eight people. Honda factory tuning company Mugen will also offer performance and styling parts for the fifth-generation minivan.
The Odyssey is offered in B and G trim with a 173-horsepower, 2.4-liter I-VTEC four-cylinder mated to a continuously variable transmission with optional paddle shifters and seven 'speeds.' The more upscale Odyssey Absolute features sportier styling, and but all models are available in either front-wheel drive or all-wheel drive.
The interior follows a "modern suite" design concept inspired by luxury hotels, with wood trim and comfortable-looking seats. Additionally, customers can choose between models with a lift-up second-row seat or a lift-up front passenger seat. Honda highlights the Odyssey's low floor height and high ceiling, which accentuates the spacious interior. The low floor also endows the minivan with a step height of 30 centimeters (11.8 inches) at the rear sliding door to afford easy entry.