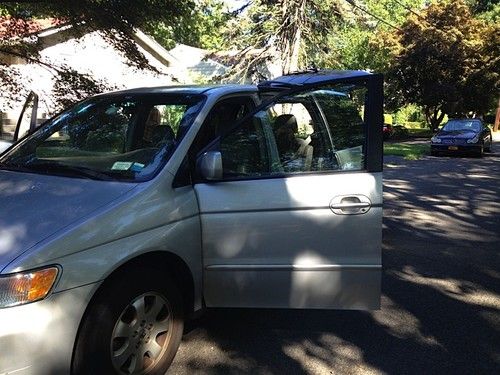 Condition: UsedA vehicle is considered used if it has been registered and issued a title. Used vehicles have had at least one previous owner. The condition of the exterior, interior and engine can vary depending on the vehicle's history. See the seller's listing for full details and description of any imperfections.Seller Notes:"There are some scratches. The power doors do have to be worked on. I believe it needs new rollers. It also needs new brakes. I believe the brakes on the car now are "warped". Both are relatively simple fixes. Other than that, it works great!"

UP FOR SALE IS AN ABSOLUTELY AMAZING 2002 HONDA ODYSSEY EX-L.

THE CAR IS SILVER ON THE OUTSIDE AND HAS GRAY LEATHER WHICH IS IN GOOD CONDITION.
THIS IS THE TOP OF THE LINE ODYSSEY FOR THE YEAR.
IT HAS NAVIGATION FROM THE FACTORY AND THE DVD WAS INSTALLED FROM THE DEALERSHIP.
VEHICLE WAS PURCHASED BY ME WHEN IT WAS BRAND NEW FROM WHITE PLAINS HONDA IN NEW YORK.
THIS IS A GREAT ONE OWNER CAR WITH LOW MILEAGE. OTHER ODYSSEYS ON EBAY HAVE OVER 100,000 MILES AND AREN'T EVEN FULLY LOADED!
THIS CAR HAS NOT BEEN IN A SINGLE ACCIDENT. IT HAS NEVER BROKE DOWN ON ME. IT REALLY IS AMAZING!
THE CAR DRIVES ABSOLUTELY GREAT! THE INTERIOR IS IN GOOD CONDITION!
THERE ARE NO LIGHTS ILLUMINATED ON THE DASH. NO CHECK ENGINE LIGHTS. IT IS GOOD TO GO!
THESE ARE THE VALUES ON KBB:
EXCELLENT: $9,239
VERY GOOD: $8,914
GOOD: $8,764
FAIR: $7,989
MY RESERVE AT LESS THAN FAIR!
ALL THE TIRES HAVE BEEN REPLACES WITH BRAND NEW MICHELIN TIRES WITHIN THE PAST YEAR
THERE ARE ONLY 2 THINGS THAT NEED FIXING ON THE CAR THAT WERE RECOMMENDED BY MY MECHANIC.
IT HAS POWER DOORS, BUT OVER THE YEARS, THE ROLLERS ON THE CAR HAVE GONE BAD SO IT SCRAPES THE SIDE OF THE CAR WHEN IT OPENS AND CLOSES. FORTUNATELY, THE SCRATCHED PART ON THE OUTSIDE OF THE CAR IS A SINGLE PANEL WHICH IS INCREDIBLY EASY TO REPLACE. IF YOU DON'T WANT TO FIX IT, YOU CAN ALWAYS OPEN THE DOORS MANUALLY.
ALSO, THE CAR NEEDS NEW BRAKES. I BELIEVE THAT THE CURRENT BRAKES ARE "WARPED" BECAUSE THE CAR KIND OF VIBRATES WHEN IT BRAKES.
THESE ARE REALLY THE ONLY 2 THINGS THAT NEED FIXING. THAT REFLECTS IN THE RESERVE PRICE THAT I HAVE PUT.
I NEED A $1,000 DEPOSIT VIA PAYPAL IMMEDIATELY ONCE THE AUCTION ENDS. THE REMAINING MUST BE PAID WITH A CERTIFIED CASHIER'S CHECK.
THERE WILL BE ABSOLUTELY NO PRICE NEGOTIATION AFTER THE AUCTION ENDS. YOU MUST PAY THE FULL COST OF THE WINNING PRICE!
THIS IS MY DAILY DRIVER SO THE MILEAGE WILL BE MORE THAN THE MILEAGE LISTED IN THIS AD BUT NOT TOO MUCH MORE BECAUSE THIS IS A QUICK 3 DAY LISTING!
On Sep-05-13 at 22:35:50 PDT, seller added the following information:

I FORGOT TO TAKE A PICTURE OF IT BUT THIS ODYSSEY DOES HAVE A DEALER INSTALLED DVD PLAYER WITH THE OVERHEAD MONITOR!
GREAT FEATURE!! IT EVEN HAS INPUTS FOR AN X-BOX, PLAYSTATION, WII, OR ANYTHING ELSE THAT USES RCA INPUTS!
FANTASTIC FEATURE FOR KIDS AND GROWN UPS ALIKE!