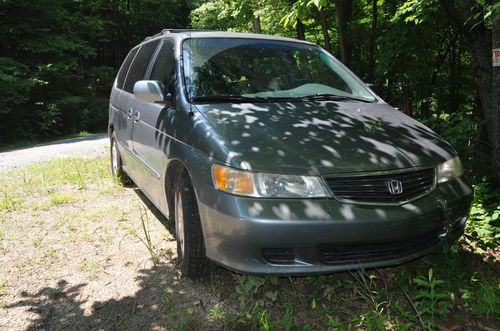 Condition: UsedA vehicle is considered used if it has been registered and issued a title. Used vehicles have had at least one previous owner. The condition of the exterior, interior and engine can vary depending on the vehicle's history. See the seller's listing for full details and description of any imperfections.Seller Notes:"This Odyssey EX is in very good condition. Non Smoker . It has been mechanic owned and maintained with only two owners . Clean carfax with service records. New tires and newly rebuilt transmission with only 3200 miles on them . The van itself has aprox. 221,600 miles and runs strong . Milage may go up as I drive it occasionally . It uses no oil and has all oil changes every 3500 all of its life. Miles are mostly road trips to Florida. My last trip a week ago I was getting 27 mpg. The windows are factory tinted . Included is a reese hitch I used for a bike rack . FOB Key . Plush seats . Ice cold A/C . Everything is in good working order. Ready for anywhere you want to go . Please e-mail if you have any questions. Thanks for looking ! This is one van that won't let you down ."

The original owner was a retired couple who drove all over south Fl. and Ga visiting their children and grandchildren . Owner # 2 is the mechanic who always serviced the van and decided to purchase it for his growing family . The van is mechanically sound and only being sold due to a job relocation to Washington state where the suburban would be more practical due to weather. So here it is with a new transmission , new tires . Needs nothing but a driver.

There are a few small dents that you may not see in the photo in the rear and I am sure there are some minor scratches or wear . The seats are in very good condition. It has no odors and was never smoked in.
Everything was just serviced and ready to go.
I will accept a pay pal deposit only and the balance in cash or postal money orders.
The buyer is responsible for pickup within 7 days and full payment within 48 hrs.