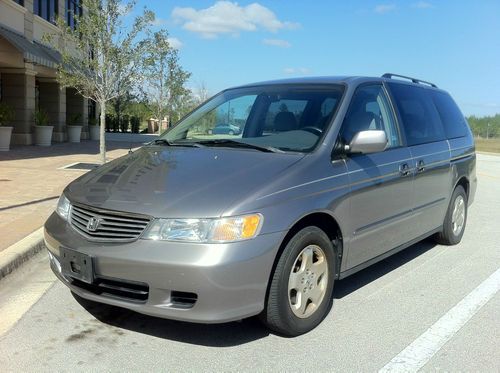 1999 Honda Odyssey in MINT condition with only 69K original miles. 100% CARFAX guaranteed! Excellent condition inside and out with all scheduled maintenance up to date. You will be hard pressed to find another van with such low miles in better condition. Everything in great working order, engine works perfect, transmission shifts flawlessly, all electronics including AM/FM and CD work great. We are third owners of the van and have not had any issues with it whatsoever, a very quality product by Honda. The van has never been in any kinds of wrecks or accidents of any kind and is all original. EX model which is fully loaded including Traction Control System, Cruise Control, Tilt Wheel, Rear A/C, 4 Captain Seats, Dual Power Sliding Doors which are Remote Controlled as well, Ice Cold A/C, Alloy Wheels, and more! Very Clean inside and out. Must see to fully appreciate. Clean and clear title free of any liens in hands. Feel free to contact us at 386-385-4377, Thanks.

*Mileage is subject to change as the we use it for local hometown travel.